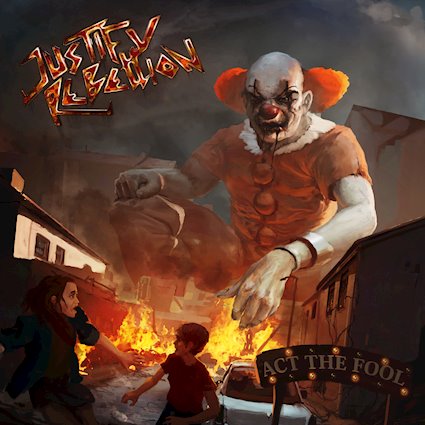 Justify Rebellion premieres the music video for the song “Act The Fool”, via Mighty Music Records.

The band released their full-length album last year called “Unleashing the Beast”, and now they are back with a mind-blowing song and music video. This song is something different from what the fans, and listeners are used too from this band like their heavy/trash metal destruction and domination, but it’s a good change, with a impressing story.

If someone likes a great kick-ass music, this is the jam for them. This song is a mix of punk, metal, and rock music. Trough out it, it can be heard some amazing riffs, that are in a technical term of playing, perfectly balanced, with a modern production to it, and of course the song is a modern fusion of many alternative genres. Video itself is quite interesting, at the begging of the video, the band can be seen in the circus, it’s a great theme for the song, as it goes with the title of the song just perfectly, there are dancers that are clowns, which made the video more cheerful and interesting, as a background story for the song.

About the vocals and the song in general is that, it has that punk vibe, with some cool riffs and solos, and cheerful chorus, metal crushing riffs, but the lyrics are about the people from all over in 2016 the world that disgusted themselves as killer clowns for the purpose of intimidating each other in the streets, an episode where society was exposed to a creepy trend, so at this point the cheerful chorus add that creepy touch to the song in the great way, also at some point of the song there is a surprise, which listeners will love the most, there is a metal part, with crushing riffs, and outstanding vocals of Nicklas Sonne Vocalist from the band Defecto totally presented the song in a different perspective in a musical way, but tell the dark side of the story like it is in the lyrics of the song, also the main Vocalist Lucas Raunterbeg presented the song in a perfect way as well, with his punk-rock attitude and vocals, adding the influence of punk-rock which is most present in the song. He did a great job, also his attitude gave the song it’s greatness.

The  production, mixing and mastering where done by Nicklas Sonne, which shows that he is a multi-talented person ,and that he did an outstanding job for this song.

Solos at the end, added the tension to the whole song, and at the end, also song got faster, then slower, and that balance made the end of the song epic and divine.

Clowns and rock music, the bound is just unbreakable. Crazy song about dark side of life, killer clowns, that will spin the listeners head around.

Check out the official premiere for the song called “Act The Fool” here, enjoy it: