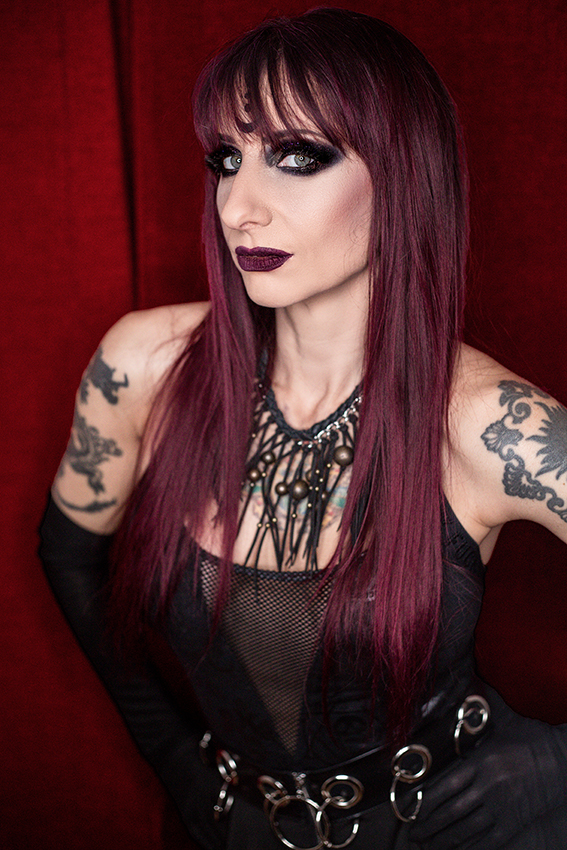 Liv Sin continues to unveil hit songs from their upcoming album. This time, the band led by Sister Sin Vocalist Liv Jagrell. Another great sign that the upcoming Liv Sin record, produced by Simon Johansson (Wolf, Memory Garden) and Mike Wead (King Diamond, Mercyful Fate) – with mixing and mastering by Tue Madsen (Witchery, The Haunted, At The Gates, Artillery, etc) will be another masterpiece. Once again Liv and guys from the band – deliver one bad-ass hard hitting powerful rollercoaster with a dose of harsh truth, to it. Someone needs to present the hard truth, right? And they are doing it perfectly once again. Followed by this intense and crushing riffing – that ultimate metal and rock strength to it. Fierce intro shows – that this song is one blasting crusher of classic rock/metal – promising more phenomenal moments of it and great technical adaptation.  Melodies and riffs are coordinated in such smooth matter, creating this symphony of destruction that hits hard, as it can. Of course , everything in technical terms is just gone in outstanding way, awesome combination and balance of riffing and melodies, passages, also other technical adaptations – shows the unbreakable spirit of the song and it’s quality, that is high. Arrangements and production are done in good manner, every detail synchronized at the right moment, every passage arranged greatly to switch and slide so smoothly to next passage/part. The great arrangement adaptation can be heard at some part, where Liv sings. This guys adapted  her raw vocals in such masterful way to the whole intense and dynamic atmosphere of the song, but they made her chorus parts even better – with a little touch of softness to it, making this song more perfect and epic.

Liv vocals are awesome, as usual. Her raw vocals – are something unique, that is for sure her trademark. And she has such insanely good coordination – while singing and balance to it, of course. She also put some emotions to this song, sounding so strong and powerful – doing a perfect job on reflecting the meaning of the story. This also made this song, more powerful, more bad-ass with a touch of true and uncompromising metal and rock essence.

The topic of this story is harsh reality – that we all face, very often. It is about mass shouting. This is a hard topic to talk about, but it needs to be talked about. Liv once again nailed it – with storytelling, that is adapted to the music part of the song in outstanding way.  So we on global scale, all have this mass shouting problem, where innocent die – but also the shouters die too. Who is too blame? Of course the shouter is too blame, but not only him. The global system in all countries is too blame. Better to prevent it and not to happen. We are all expose to violence on tv, internet and other ways of communication. And of course bad living standards, as well. As human race, we are not all build to be good or being sane, healthy too. That is the case – with this people, they are ill. They need help, also institution and experts to work their job of preventing massacres like this.

Since no way has a right to take other humans life, you didn’t create life so that you can take it. They are deeply ill and weak, it just happens – but promoting only violence and movies like this, also mind control propaganda of fear and unhappiness. This leads to people being killed, since this folks are not rational nor mentally ok. And this is where system is too blame and no one else. They could save many lives, by preventing and hospitalizing this people properly. Liv once again got out of the box – with straight forward topics. Antihero is a coward, but real heroes must help the anti ones – to go on a right path. She made a point with this one, as well. And also by creating awareness about something that is not right. If many of people around the globe where like this, we would have functional society – that can only become advanced in a good way. Amazing storytelling by Liv and her bad-ass attitude once again dominated in epic proportions.

This song has it all, story, beyond good musical structure and true wake-up call power to it. It is a fierce and harsh metal/rock crusher – that bangs hard and awakes the true spirit of metal and rock. It true rebellious form and power. Music for the ears and soul – that can evoke only strength and power.

Better to prevent it, not to cure it or saying goodbye – followed by mighty and true metal/rock essence.

“The song “Antihero” came to me after yet another mass shooting. It is an imagery scenery of brutality and chaos, and the immense fear you go through when searching for a way out of that hell. I wonder what drives a person to do something like that, how someone can have so much anger and hate inside, but also I get surprised every time that nothing change, nothing happens. I’m a pacifist and I can’t really get my head around how the right to have a gun seems more important than human lives”.

Check out premiere for music video of “Antihero”, below:

Crom premieres lyric video for “The Era of Darkness”, feel the power of diverse mightiness of metal!
Forever Autumn will release upcoming record “Crowned in Skulls” on February 3rd!