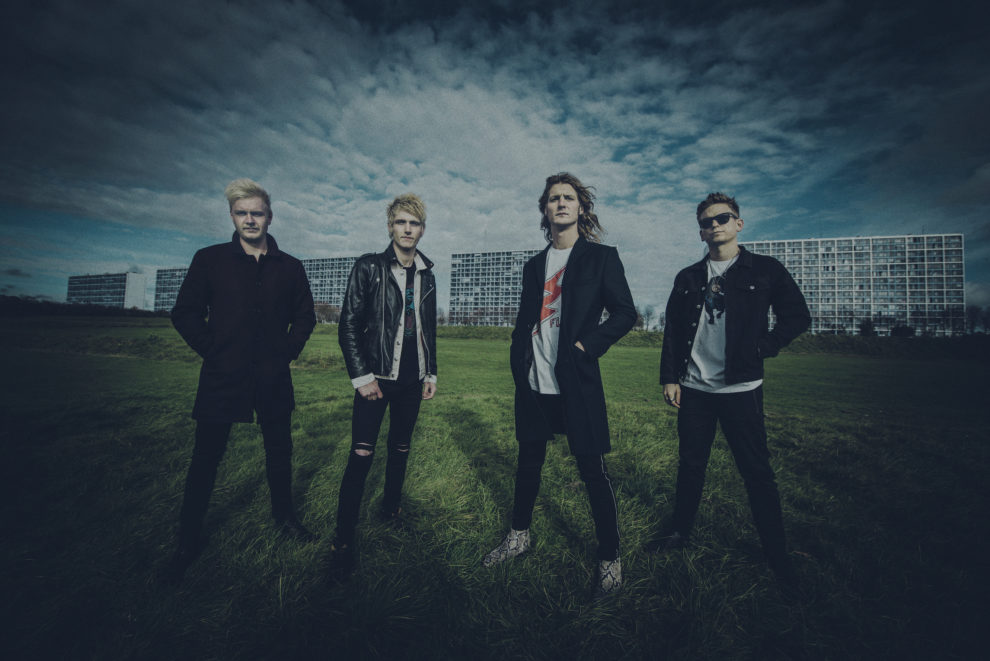 Crazy song with some crazy story-line in the lyrics about psychotic relationships, and insinuation to some sexual story, about that magical sexy women that is hotter than hell, and she is the devil herself, that is very psychotic also, crazy and wild as she can be.

This song is diverse, it’s basically a indie rock song with a touch of pop music, and at some points it has some rap or r’n’b beats.

All of this creates the atmosphere in the song that is quite strange, but unique. The video has a high quality production, and the wardrobe of the band reminds a little bit of the band Ghost, just a little bit, but they did the great job presenting them-self like that. Vocalist is a good actor, with his interesting, not ordinary vocals, he basically dominated the music video, with acting and vocals, making the experience for the viewers and listeners something crazy and divine.

Melodically and full of energy this song shows that the band has a great approach to their music, and also it seems the most important thing to the band are lyrics, and they did a amazing job blending it with the their music, so that the sound and lyrics are one. Crazy hell, where the rock gets dark and wild, lifting up the mind of the one man, as she burns his thoughts with fire.

“Crazy” is a celebration of all the women we meet in a lifetime. Our hero is getting seduced by the woman that tries to take over his life, and he forgets who he is. In the video we see the rock star “devil” inviting the ordinary man into a universe of control and craziness, with pink crosses, pythons and motorcycles… “Crazy got nothing on me!”

Video was shoot by Emil Winther.

Mixed and mastered by Tue Madsen.
Copenhagen based Lucer is back with their second album ”Ghost Town”, the successor to the hit debut “Bring Me Good News” from 2016. The debut secured the band 2 years of extensive touring activity in all of Europe, and physical distribution world wide.

With more than 250 live shows and a rock solid print in the European rock wold, Lucer has made a substantial impact on the Danish and international rock scene. Among other things, the collaboration with Danish rock n roll legend Mike Tramp have helped the band in the right direction.

It is on the big stages, Lucer have gotten a reputation, being a explosive and energetic live band, delivering amazing experiences every time. With a brand new sound, the band has see its mind on living up to the reputation, being the most promising rock band from Denmark in more than 10 years.

In spring 2017, Lucer starred in a big countrywide beer commercial for danish brand “Royal Beer”, the single “Midnight Sun” was the soundtrack for the entire campaign.

“Ghost Town”, was produced by danish duo Thunder & Lightning Music, who are also known for the work they’ve done with the danish singer Jacob Dinesen. On top of this, the Danish metal-guru Tue Madsen has finalized the mixes, giving the album a unique combination of rock with a modern and massive sound – along with catchy songwriting, and pop elements. Rock fans all over the world can look forward to this album from Danish Lucer, with a unique approach to rock n roll, good songs and a Nordic touch.

Tue Madsen:
“It was a pleasure to work with LUCERs album. Every song is a hit in its own way. Nice, solid rock, Motown and disco in a great mix.”

Check out the premiere of music video for the “Crazy”, here:

Allegaeon releases new music video for “Metaphobia”!
Minus One premieres the music video for the cover song of the 4 Non Blondes “What’s Up”, chilling song with good vibes!