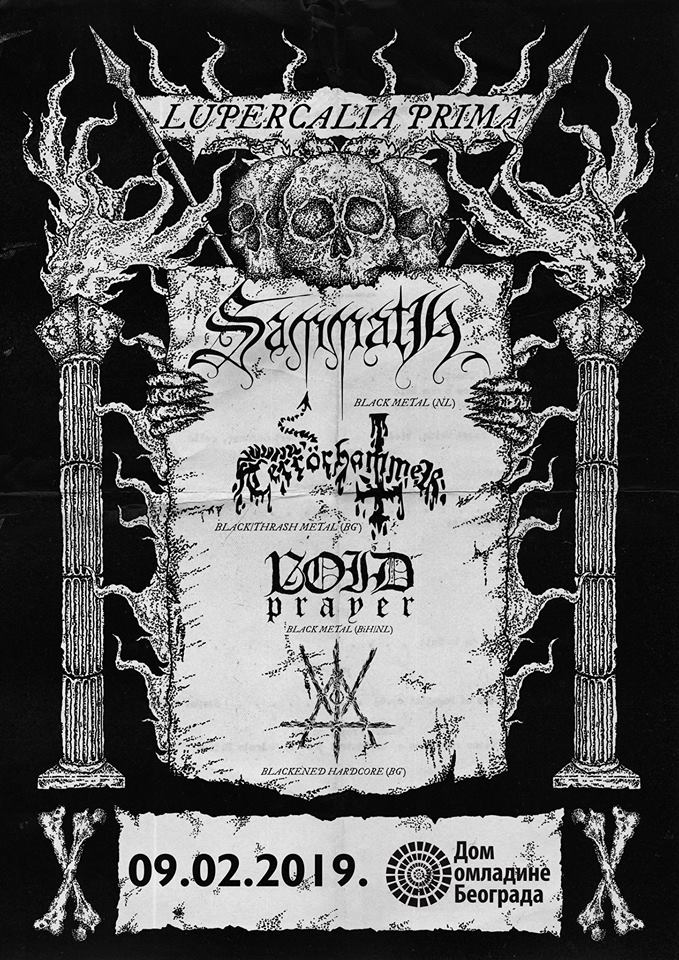 On Saturday, 9th February, Belgrade will have the opportunity to witness the fury of the band Dutch metal titans Sammath (NL) at the festival known as Lupercalia Prima. This concert will be held at Dom Omladine, Belgrade.

Even after 25 years of spouting anger and horror, Sammath have not relented. This is Sammath’s first time performing outside of their native Holland or Germany, if you are wondering why Sammath chose Belgrade to start the celebration of their 25th anniversary, come and learn at your own peril.

The other bands honoring us with their performance at Lupercalia Prima will be, dark and exhaustive black metal tribe Void Prayer (BiH / NL) (Void Prayer Interview), Terrorhammer (SRB) (Terrorhammer Bandcamp link), a violent necro-speed metal act who will play in their home country for the first time in five years; and Virtue of the Vicious (SRB) (V.o.t.V Bandcamp link), hardcore-tinged black metal upstarts.

This multi-talented set of bands that will perform is a real treat for the fans of metal and the unique alternative underground subculture of the region. It represents various manifestations of the black metal genre, keeping the line-up dynamic and compelling.

Sammath was formed by Jan Kruitwagen in 1994 under the influence of the thrash, death and speed sounds of the 80’s. Almost ten years later, bassist Ruud Nillesen joined the line-up and perfectly contributed his explicit expression of triumphal rage, destruction and annihilation. Finally, machine-gun drum weapon Wim van der Valk, who is difficult to drag away from other projects that he is involved in, took on the role of the drummer in 2016.

What makes Sammath unique, in a sea of thousands of identical sounding black metal bands, Sammath is a force to be reckoned with, playing with a unique violence which puts them head and shoulders above the face-painted Darkthrone clones.

Do they have an unsurpassed album behind them? Yes. The audience still lauds their most recent release, ”Godless Arrogance”, as one of the best in the genre.

Have they created other unforgettable masterpieces? Absolutely. Each of their five albums was created as a completely new project, independent from one another, while simultaneously containing a synergistic energy which made them whole, and has been compounding for 25 years. Maintaining quality, Sammath completely bypasses popular trends in metal, and continues to create timeless unsurpassed sounds, based on the rough beginnings of metal culture of the 70’s and 80’s, while leaving behind a trail of the originality and unique style.

Lupercalia Prima is not meant for listeners of weak stomach and heart. This genre is celebrating the lyrics, that are born of the mystical crossing of the real and the surreal, history and mythology, cruelty and hopelessness, and paired with music that is raw, brutal, violent, and it is not recommended for the faint of heart.

Check out the EP of the Virtue of the Vicious called “Oneirophobia” here, enjoy it:

Check out the song “Of Loving Bereft” of Void Prayer here, enjoy it:

Check out the song for the Terrorhammer called “Riding on a Devil’s Storm” here, enjoy it:

Until their concert in Serbia,Belgrade, check out the live performance of the song called “Totenhüge” here, enjoy it:

Check out their song Godless here, enjoy it:

Check out the official announcement for the show in Belgrade by the band here, enjoy it: