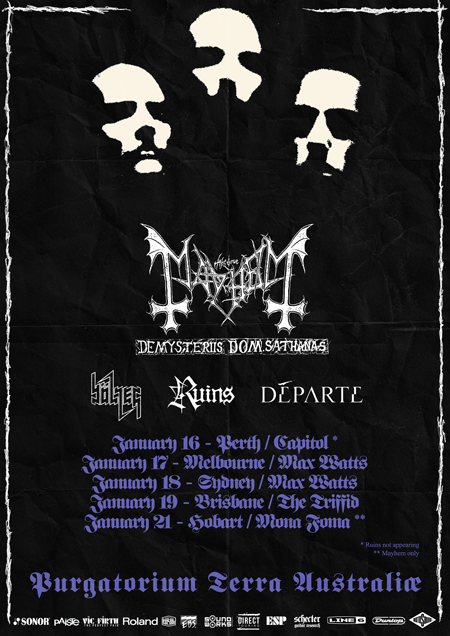 Australian summer is about to get hot: Mayhem have announced to bring their complete landmark debut album ”De Mysteriis Dom Sathanas” live to Down Under in January 2018. The Norwegian black metal icons will be joined by local label mates DÉPARTE and supported by BÖLZER as well as Ruins.

“The first time, I ever heard from Mayhem was in ’91-’92 when I received a letter from Euronymous. I did not know that message was going to change my whole life. They were looking for a new vocalist to replace Dead on their debut album. Of course, I agreed to their offer and in 1993 we recorded ‘De Mysteriis Dom Sathanas’, which to me remains one of the most magical albums of all time.

The music opened some unfathomable dimensions that reached beyond what we were able to handle and it unleashed a complete chaos, which ended up at burning churches and eventually a murder within the band. It was almost impossible to release that record, but when it finally came out under the sun in ’94, it left a lasting impact on the whole metal scene. The so-called “2nd wave of black metal” was born in the cold and dark underground of Oslo. At the same time Mayhem collapsed and got burned down as well. From those ashes, the band had to rise again, when  Mayhem reunited with some old and new members. Yet that album always remained so strong and so unique that even after my reunion with Mayhem in 2004, we were still not comfortable to present it live in full. Time passed and the whole band got stronger and more experienced. In 2016 we suddenly felt that it was time to finally play the whole record in order to unleash That Beast after more than two decades. ”De Mysteriis Dom Sathans” will soon become alive!”

Mayhem latest critically acclaimed album, ”Esoteric Warfare” is streaming here and can be ordered in various formats from the Season of Mist shop. The cover of ‘Esoteric Warfare’, which has been created by renowned Polish artistZbigniew M. Bielak (Ghost, Paradise Lost, BÖLZER, Zhrine) can be viewed together with the track-list below. 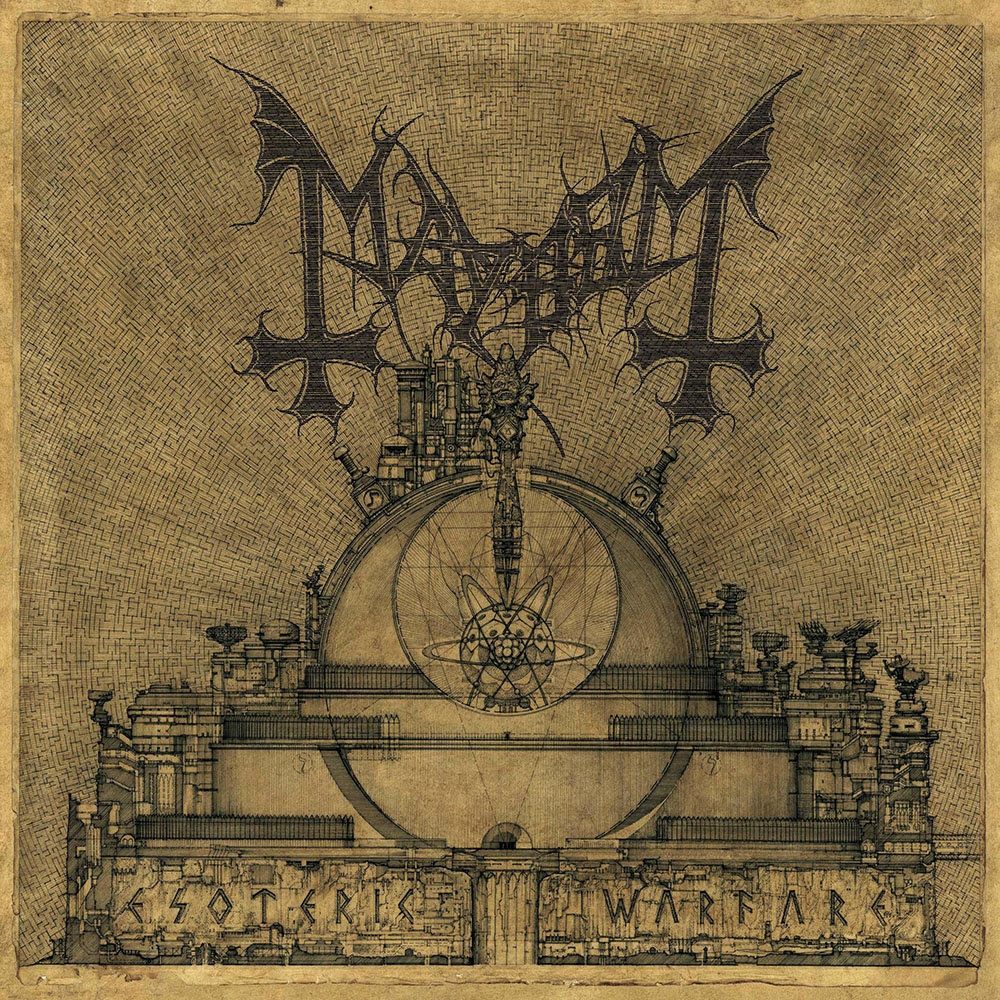 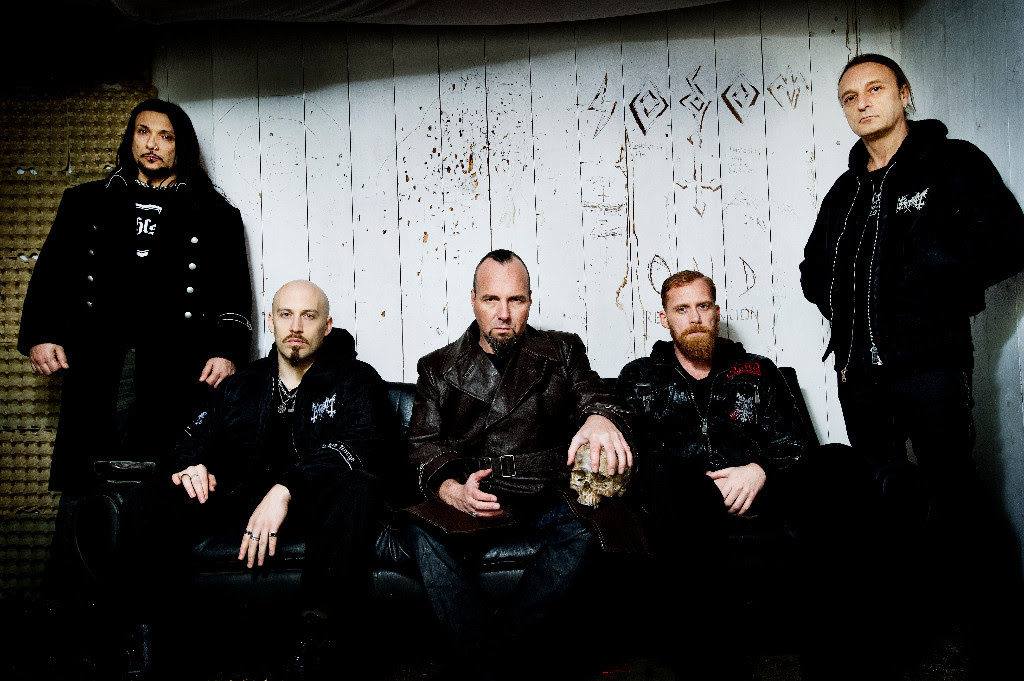 It has been seven long years since Mayhem released their fourth and last full-length “Ordo ad Chao”. Founded as early as in 1984 in Oslo, Norway by the late and legendary frontman Øystein Aarseth aka Euronymous, bassist Jørn “Necrobutcher” Stubberud, and Kjetil “Manheim” Haraldsson on drums, the band took its name from the Venom song “Mayhem with Mercy”. Continuing and renewing the Black Metal style heralded by the English trio, Mayhem soon became the instigators of the so called second wave and were at the heart of every controversy surrounding that genre. The suicide of misanthropic frontman Per Yngve “Dead” Ohlin.

The murder of Euronymous by guest bass player “Count Grishnakh” alias the notorious Varg Vikernes. Church burnings, drugs and prison sentences, Mayhem were always at the centre of the storm. Yet not even death could stop the Norwegians, who released one musical milestone after the other. The incredible rawness of the “Deathcrush” EP (1987) was followed by the still iconic and genre defining “De Mysteriis Dom Sathanas” (1994), which featured devilish drummer Jan Axel “Hellhammer” Blomberg, who had joined in 1988. The vocalist on this album was the Hungarian Attila Csihar of Tormentor fame, who returned later in 2004 to take over from his meantime heir, the enigmatic original singer Sven-Erik “Maniac” Kristiansen.

The latter was featured on the “Wolf’s Lair Abyss” EP (1997), which was written mostly by highly talented guitarist Rune “Blasphemer” Eriksen, who scored a massive success with the highly controversial “Grand Declaration Of War” (2000). Those were followed by the more classic “Chimera” (2004) and a masterpiece of utter darkness called “Ordo Ad Chao” (2007) with Attila singing again, which inspired many bands to follow in its tracks. Mayhem had always witnessed many line-up changes due to the circumstances described above. Therefore even the loss of Blasphemer, who decided to focus on his other band Ava Inferi in 2008, did not stop the band. Activities mainly revolved around live shows, until the right balance was found again with the recruitment of Morten “Teloch” Iversen.

The guitarist had already made a name for himself with Nidigr, which is highly regarded amongst black metal enthusiasts yet remained mostly an underground phenomenon. Now his first compositional work with Mayhem is unleashed and demonstrates how perfectly Teloch has captured the essence and spirit of the Norwegian legend by linking the band back to its roots, while at the same time taking a step forward into the spearhead position of the genre instead of dwelling in nostalgia. Tremble world, Mayhem are back with a vengeance!