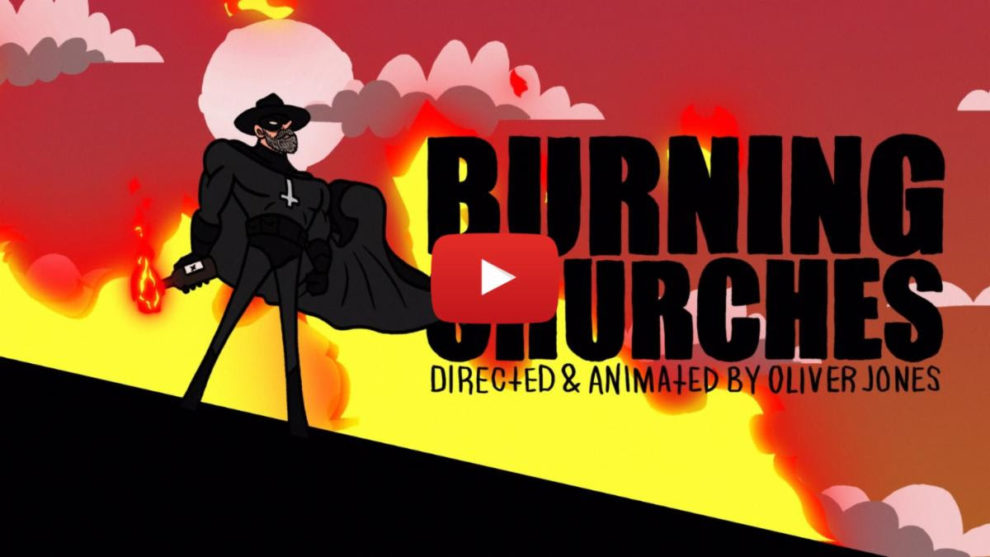 The story of “Burning Churches” goes much deeper than a first glance or listen might suggest. The new song tackles the dark, mournful tale of a young boy who was abused by a priest in his childhood. By swearing vengeance on the church and radicalizing himself, he transforms into a sort of satanic anti-hero who seems to gather more followers by the second. “Burning Churches” to the ground, one by one, he gets his revenge. Me And That Man presents the story in yet another grim snapshot with an elaborate comic strip depiction.

Nergal states this about the new music video/song:

“If someone would have told me one day, I’d release a Xmas song, I would have burst into laughter. Hell freezes over and I present to you, “Burning Churches”. This time I team up with Mat McNerney from the legendary Beastmilk, Grave Pleasures, DHG and Hexvessel. Make yourself comfortable around the Christmas tree, stoke the fire and grab yourself a drink! Hallelujah.”
Adam Nergal Darski has been a fixture in the music industry for years. As the front-man of black/death metal spearhead Behemoth, Nergal has been known to preach unholy sermons, praise Satan and sing about explicit blasphemy. Naturally, the next step was to channel those themes into another genre commonly dubbed as the Devil’s music – blues. Me And That Man is exactly that – Nergal’s solo project will surprise and bewitch the listener. The visionary creative founded the band in an effort to showcase his true ability to adapt to any genre. Released in 2017, Me And That Man’s debut album  ”Songs of Love and Death”, delivered thirteen stunning pieces full of multifaceted riffs and honest lyrics. In summer 2018, a line-up change followed, but Nergal’s solo project was far from over. Stay tuned for more details coming very soon.

Check out the music video for the “Burning Churches”, here: