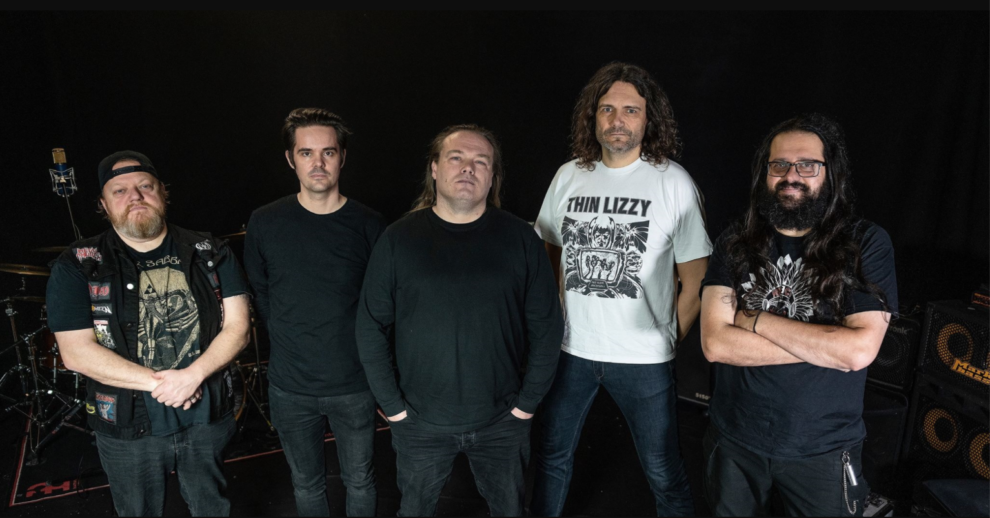 Danish melodic heavy rockers Meridian premieres the third official music video and song, the cover song of the Danish rock gods Randy for the “Shadows of Falling” (out of six) from their upcoming EP of covers “Taking Cover”, which will be released in Autumn, via Mighty Music Records.

It seems this band knows how to record perfect covers. They know for sure how to make them more interesting, fresh and quite unique in their own arrangement – which shows that the band handles playing this covers easily, but they stayed authentic with their own sound, adding them to this covers – but it was an easy job sense that the all of the bands that they covered so far, are similar to their sound and influences.  The previous two music videos and covers were big success as well, indicating that this band knows how present in the most originally way their covers of the other songs.

Now let’s get back to this cover, the video is once again highly produced with the back- ground story that follows the story and the lyrics of this cover song, once again the viewers and listeners will enjoy this video as well, with all of the heavy metal/rock domination with the fast melodic majestic sounds, accompanied by the outstanding vocals of the Vocalist Lars Märker, making it just perfect cover that will truly make the listeners listen to it a few times. He also presented with his vocals – that he can carry on the covers just in an amazing way, with his high vocals and his precise approach to the vocals in all of the three covers, but as well in their original music that they made.

It seems the band didn’t want to step out form the original songs to much, then they wouldn’t be covers – they just added the glimpse of their original music to it, but everything else is just like in the original songs. That shows that this is also just a awesome cover, that is skillfully created by the band that knows how to present not only just their music, but also someone else’s, as well. They awaken the spirit of this covers, that are forgotten for a long time, they did an amazing job by reawakening the true essence of the 80’s and 90’s rock metal domination.

Hear the sound of shadows as the fall, embrace the shadows in the name of metal and rock n’ roll.

Each member of the band picked one song for the EP, and this one is chosen by bassist Peter Bruun who states this about the new music video and song:

“Randy was a Danish band that was active through the ’80s until the early ’90s. They never got the success they deserved. In 1986 they released this song on a 7” single, and I heard it on the radio a few times and managed to recorded it on a cassette tape. I had the tape for years and kept coming back to it because this is such a beautiful and well-written song. So picking just one song for our covers EP, – it had to be Shadows Are Falling”.

Why covers? – Just for the fun of it!

It happens to most bands. It certainly happens a lot in this band. Warming up at rehearsals someone starts playing a cool riff from the good old days. – Everybody joins in on the jam and 30 seconds later everybody stops, laugh and someone says “That’s a cool song. We should make a cover of that someday”. Most often, that day never comes, but sometimes it does. Last year when the band finished recording the “Margin Of Error” album, one of the songs reminded Mighty Music CEO, Michael H. Andersen, of one of the greatest Danish bands from the 80’s, Skagarack, – and he suggested the band should do a cover of one of their songs.

The idea stuck for a while, and the band decided that once they gathered in the studio, they could just as well record a couple of songs and make a covers EP – just for the fun of it! Choosing the songs was not easy. Every discussion always ended with over 20 good suggestions. So the band applied some rules. Each member should pick one song, and nobody could argue against it. So here we are, with six classic rock and pop songs from the 80’s, grinded through the Meridian machine, twisted a little bit to suite the Meridian sound and playing style, but still paying respect to the well-known originals. All six songs are released as digital singles over the summer,

Check out the premiere for the official music video for the cover song of Randy “Shadows are Falling”, here:

Transport League entered the studio to record a new upcoming album!
Grumpynators premieres the official music for the “Dream Girl”, song about being in love with your dream girl!