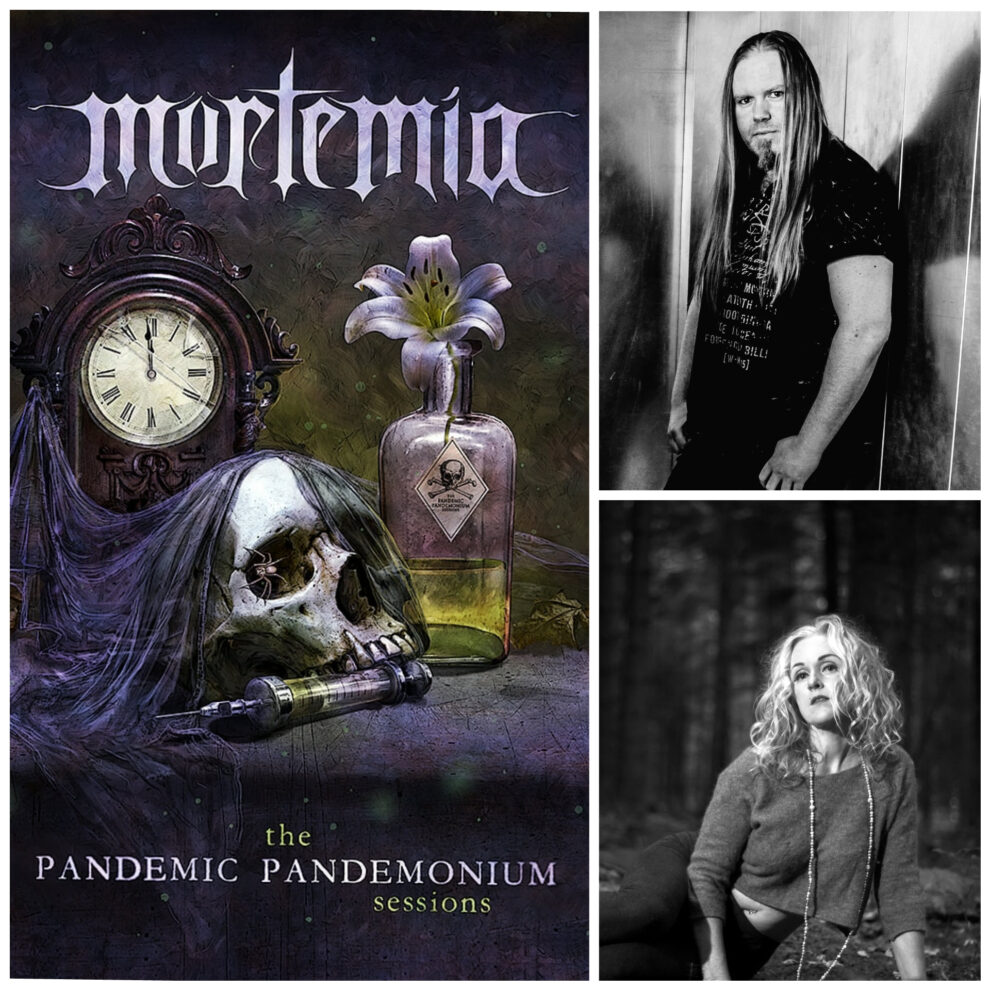 After 11 years of silence Norwegian multi-instrumentalist, producer and artist Morten Veland is once more active with his solo project Mortemia, this time with a brand new concept. ‘The Pandemic Pandemonium Sessions’ is a series of singles  released on a monthly basis, each song featuring a well known and highly profiled singer in metal scene. Madeleine Liljestam (Eleine), Marcela Bovio (Stream of Passion, Ayreon, MaYaN, The Gentle Storm, Dark Horse White Horse) and Alessia Scolletti (Temperance) were the three first special guests on this project. And now for the fourth song Morten has teamed up with Liv Kristine. Liv Kristine has achieved huge success with her former bands Theatre of Tragedy and Leaves Eyes in the past, and is now focusing on her solo career.

Morten has done it again and this time with one and only Liv Kristine. Beauty and the beast effect is complete – with this song and it’s enchanting gothic atmosphere.

It starts with the coordinated riff pattern, drum set and this unique melodic approach – all of it so smoothly arranged, for the next chapter of the song to begin. And here it come, Morten’s growls – that are flawless as usual  – added this vicious effect to this beautiful song.  Slow and fast passages are balanced and coordinated so cleverly, showing the mood changes of the song that are pure, clear and precise ones.

All of the melodic parts, atmospheric parts are fused so very well with each other – crating this melancholic effect – like it’s suppose to with every true gothic song. Morten once again surprises with his virtuosity. How he created each song with such great ideas and perfect arrangement’s. This is the case – with this one, as well.

There are influences from Tristania and Sirenia and his own project Mortemia before this ”Pandemic Sessions”. Creating this ultimate gothic metal hybrid and the masterpiece – the best one of all four songs. Liv Cristine as a high class Vocalist and gothic icon, added her personal recognizable touch. Making this song just one great orthodox and traditional gothic metal song. Her beautiful vocals added that pureness, sensitive in the song. And the song is pretty enjoyable for listening, riff pattern is adapted in outstanding way with the Liv’s vocals – which indicates that the arraignments are done in amazing way this time to- of course with great production that helped in the process. All of this added more quality to the song.

This is enchanting gothic masterpiece, wrapped in the beautiful aural sounds of gothic metal eternity.  Created by two skillful musicians – that left behind something new and refreshing for gothic metal community to witness, to feel and to hear. Aural beauty of enchanting sounds for all gothic senses.

Feel the beauty, the sadness – through the gothic divinity.

Morten Veland states this about the new song:

”I am proud and honored to introduce my long time friend and fellow Norwegian Liv Kristine as my special guest for ‘The Pandemic Pandemonium Sessions’. The fourth song is entitled ‘Decadence Deepens Within’, and will be available on all digital platforms on the 10th of September 2021. Liv Kristine is truly one of the pioneers of the genre, and she certainly has paved the way and opened many doors for many bands that emerged in the late nineties and after. This song is really inspired by the nineties era, and I could not think of a more fitting singer than Liv Kristine to sing this song. The song really takes me back in time and gives me a good dose of that nineties nostalgia. Working on this project so far has been an amazing journey for me, and I feel truly privileged to have Liv Kristine onboard this project. I am really looking forward to sharing this song with you all.”

Liv Kristine states this about the new song:

”After more than two decades, each one of us composing, recording and touring (even sharing stage and tour bus) the world with our music, Morten reached out to me for a collaboration. As soon as I heard the track on my headphones I thought “it was worth waiting”. The Mortemia song ”Decadence deepens within“ is a brilliant piece of music and it feels like it has been made for me.” Now it’s time to let the world hear it. It’s Norwegian magic.”

Check out the premiere for the new official song ”Decadence deepens within featuring Liv Kristine (ex-Theatre of Tragedy and Leaves Eyes)”, below: