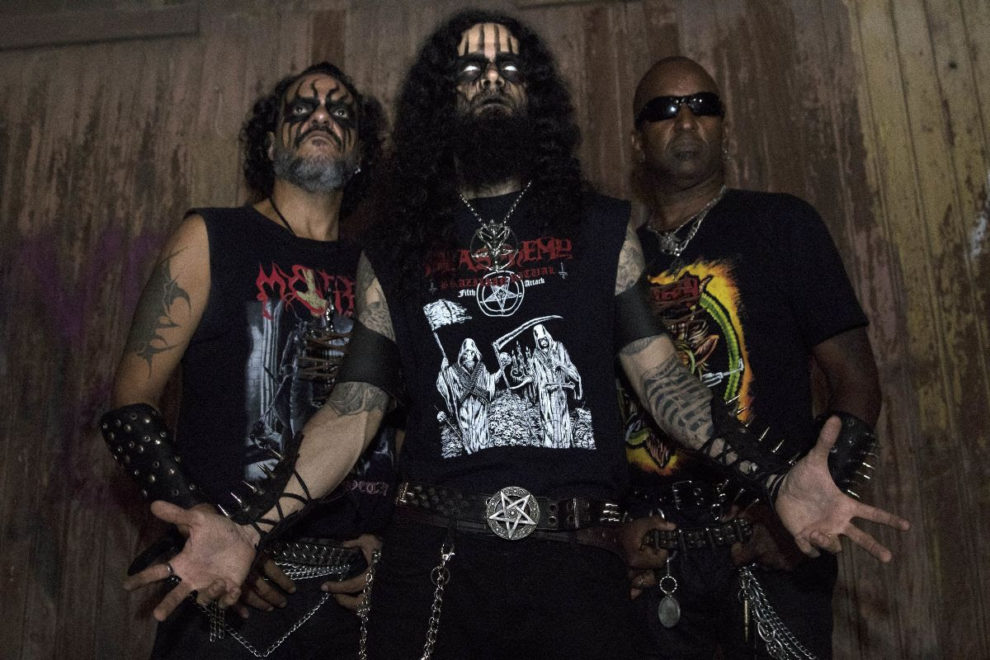 The Brazilian black metal stalwarts of Mystifier have shared a two-part mini-documentary, ”Mystifier – Two days in the Capital of Death Metal,” (Dois dias na Capital do Metal da Morte) which follows the band in Belo Horizonte (BR) at the start of their “Under the Black Magick Dinasty” tour. The film explores the history of the band as well as the early days of the Brazilian metal scene. The band visits iconic metal landmarks in this Latin American city such as the Bonfim Cemetary, where Sarcofago took the pics for ”INRI” and the Cogumelo Records shop. The clips also include behind-the-scenes footage, rehearsals, and more!

The band states this about the mini-documentary:

“On our trip to the wonderful city of Belo Horizonte/MG – Brazil (which is the city of Sepultura, Sarcofago and others of extreme acts from the 80s), we recorded this documentary about our tour to promote the recent album ”Protogoni Mavri Magiki Dynasteia,” released by Season of Mist, in March 2019.

The documentary was recorded in November 2019 and we had no idea what was coming. We didn’t even mention about the pandemic… As all of you know, all of our plans for 2020 have been ruined. All of our tours were canceled in Asia, Europe, United States, Canada and so on. Despite our Mother Earth’s relentless rage against humans (Coronavirus), we are already working on new compositions. Beelzebub is working on a solo project too.

A big hug to all our fans, friends, bands, producers, road crews, label and tour managers, pub staff and so on. We can’t wait to come back to road to keep our work on and on. Greetings form Brazil. Stay safe!”

In addition to the documentary, MystifieR has also recently released videos for the songs “Witching Lycanthropic Moon” and “Akhenaton (Son Mighty Sun),” both taken from 2019’s ‘Protogoni Mavri Magiki Dynasteia.’ The videos can be seen HERE and HERE, respectively.

Brazilian act Mystifier was formed by lead guitarist and bassist Beelzeebubth, drummer Lucifuge Rofocale, guitarist Behemoth, and vocalist Meugninousouan in Salvador, Bahia in 1989. The band created an aggressive, fast, and malignant sound within the classic black metal style, which makes them veterans of their scene.

A first demo tape, which was entitled ”Tormenting the Holy Trinity” came out in November 1989 and secured the band several shows all over Brazil. The 7″ debut single ”The Evil Ascension Returns”, as well as a second demo entitled ”Aleister Crowley”, led to widespread underground recognition for Myst in 1990.

Mystifier‘s debut full-length, ”Wicca,” was already released worldwide in 1992 and the Brazilians managed to cement their reputation with each following record and accompanying tour. ‘Göetia’ hit the streets in 1993, ‘The World Is So Good That Who Made It Does Not Live Here’ followed in 1996, and ‘Profanus’ came out in 2001. In the wake of the deluxe box ‘Baphometic Goat Worship’ (2008), Mystifier performed at the NWN Festival ll in Berlin, Germany and several other festivals around the globe.

As time went by, Mystifier underwent some radical line-up changes. Vocalist Leandro Kastyphas was replaced by the exceptional Diego Sorcerer Do’Urden from Infested Blood, and drummer Alex Rocha (Poisonous) handed his sticks over to Edward WarMonger (formerly of Medicine Death), who brought much experience and maturity to the group’s compositions.

Having wrecked stages throughout South and North America, Europe and other places with several sold-out shows during the ”Bloodshed Rituals” tour in support of Rotting Christ, Mystifier are now proudly presenting their newest offering ”Protogoni Mavri Magiki Dynasteia!‘

Check out the mini-documentary part 1, here:

Check out the mini-documentary part 2, here: