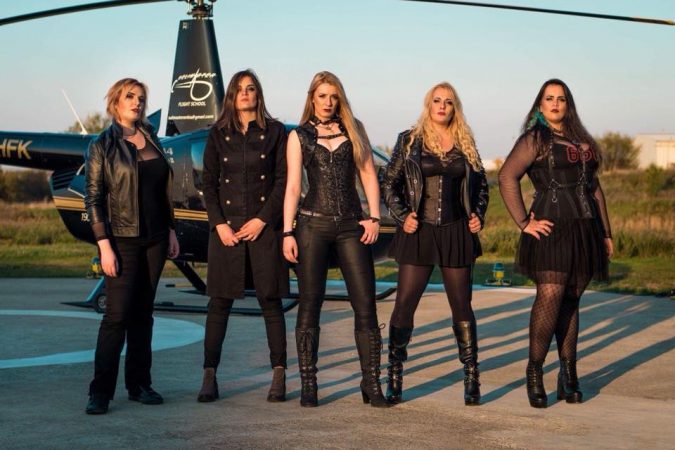 I can say about this music video that it’s amazing, the power and the energy that these girls have, is beyond everything, the riffs are heavy, technical part is so very well combined with melodies, and then some heavy part’s of the song will hypnotize you completely, also the location is great, and goes with the story of the song.

Statement of the Nemesis drummer Selena Simic about the music video for the ”Uprising” song:

” We hope that the song and the song will be worth the wait, because we gave our maximum and spent two days on the shots we organized in our own way, and most of all we think of the physical tweaking of the amplifiers, drums, lights, announcements and aggregates that we have the smallest drop.”

Musical production for “Uprising” was signed by Hausmeisters Tonfabrik, that is, Stevan Radoičić, and for the recording of video and video editing was the team from the On-Set Studio consisting of Stefan Tasić and Magdalena Stankovic.

Statement of the band about the making the music video ”Uprising”:

“This video is definitely something about which we have done the most so far and we hope that the audience will recognize it when he sees and hears the song. The whole action was very guerrilla because resources were limited to us, but each of us gave our maximum to make it all possible. For recording and editing videos, On-set studio is composed of Stefan Tasic and Magdalena Stankovic, and the mix and master of the song are signed by Stevan Radoicic, we especially thank those people for organizing the song as much as we do 5. The concept of the video will not be revealed because it is reserved for the prime minister, but we hope that they will like to see those who watch it.

In addition, we would like to thank you very much and to thank Sari Krneta and the Balkan Helicopters team who lovingly welcomed us during the first day of the shooting and made us feel like the big rock stars. In addition, we must thank the Cultural Center Magacin, Bojan Simic,Isidora Dimić, Zoran Nestorovic, Ivan Srdanovic, Igor Jelic, Tamara Tasic, Leo Ivanisevic, Teodora Milutinovic, Dragan Gavrilovic, Stefan Simic, Veljko Veljkovic, Nikolic Vidojevic, Vito Kovacevic, Uros Milosevic, Srdjan Zuvić, Radomir Popović and Vladimir Obradović, an expert associate at the Bežanijska Kosa student sports center, who during these days helped us with shooting and giving the resources that had not failed us. ”

Nemesis is formed by 5 girls, Sanja Drca – vocals, Aleksandra Petrovic and Tijana Milivojevic on guitars, Anja Tvrtkovicon bass guitar and Selena Simic for drums. For the past two years, they have actively promoted their author’s work inspired by the bands of Arch Enemy, Death, In Flames, Kreator. In addition to numerous performances in Serbia, they had remarkable performances in Ljubljana at the ”Day of Rock Women” Festival and at this year’s Demofest in Banja Luka in front of 5000 people. Their performance is characterized by melodic riffs, a strong rhythm of the sections as well as the raw energy that this five has. So far they have released two singles, “Vengeance” in the form of video clip and “Divine Retribution” as a lyric video. They are currently in the stage of recording and publishing new singles and spots, and they hope the album’s debut will be released next year. Inspiration for texts is in the 21st century problems, such as capitalism and globalization, but also in philosophical themes.

Check out the official music video for the ”Uprising” here, enjoy it: