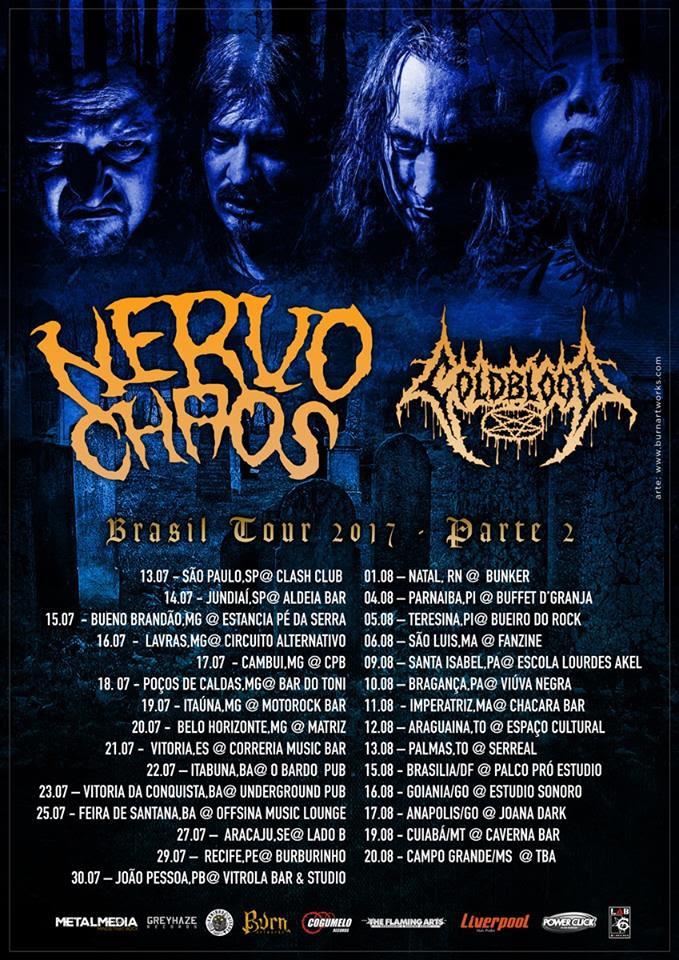 Brazilian death metal lords Nervochaos ho just concluded their Brazilian Tour Pt. 1 with Justabeli ,are ready to kick off on the second part of the tour, with the death metal act ColdBlood.

Nervochaos most recent Asian tour co-headlined with Krisiun and presented by Alpha Omega Management‘s Alpha Omega Tours ,was a success and has received a mini-documentary.

All concerts are part of the promotion tour of the recently released ”Nyctophilia‘. The album can already be bought at the main specialized stores of the market, either directly with the band, by email, Facebook or in the official store: https://goo.gl/aF7Xkx.

Nervochaos released their new album ”Nyctophilia” on March 10th in Brazil via Cogumelo Records. The art of both the cover and the booklet was created the talented Brazilian artist Alcides Burn (Blood Red Throne, Acheron, Iconoclasm, Malefactor, Queiron, Headhunter DC, etc). ”Nyctophilia” was recorded in Italy at Alpha Omega Studio, along with producer Alex Azzali, who is also responsible for mixing and mastering the work.

Nervochaos stated this about the tour:

Documentaries for Brazil and Latin America have also been made available, be sure to check them out here:

In the video we will see the band’s passage through Japan, South Korea, Singapore and Indonesia. Watch it here, enjoy it:

Check out the outstanding 360° live studio video for the song ”Total Satan” here, enjoy it: