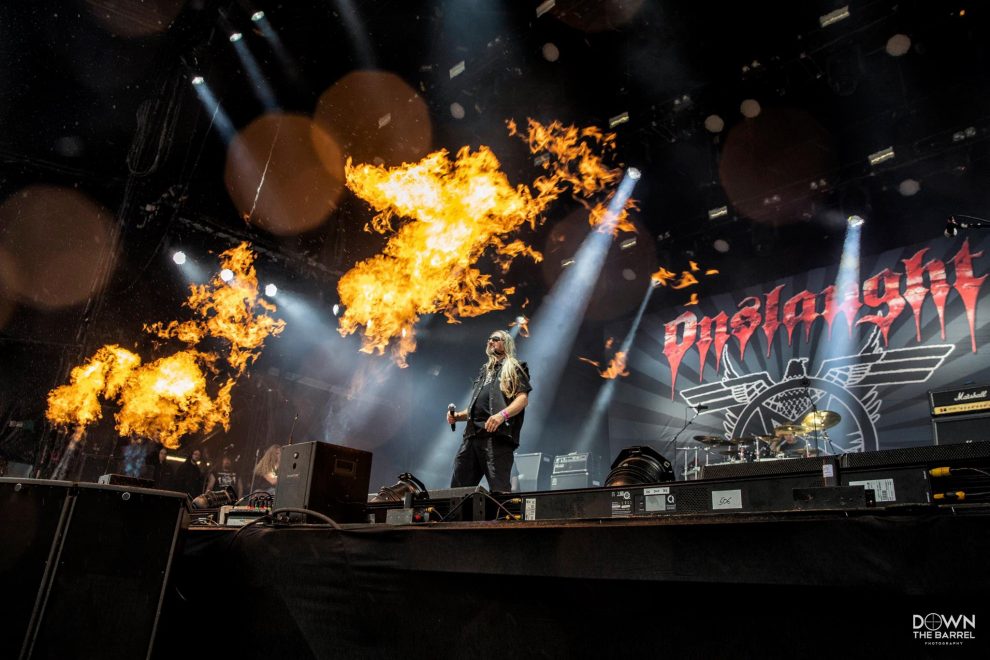 The band’s guitarist Nige Rockett stated this about the recap from the show:

“What can I say, it was such an awesome day, but also a very apprehensive one in many ways. This was the first show Onslaught have played in over 9 months, (the enforced layoff was due to myself recovering from a collapsed lung I received whilst on our last European tour in 2017) so the fear of being a little rusty was always in the back of my mind. Then, of course, there was the additional pressure of the new guys, (Guitarist ‘Wayne Dorman’ & Drummer ‘James Perry’) making their full-time debuts for the band in front of such a huge crowd, but no worries whatsoever, the guys delivered in a super professional way as you will witness in many of the videos. If that wasn’t enough to focus on for one show, we decided to add a brand new track ”A Perfect Day to Die” to the setlist at the last minute, with only one full band rehearsal behind us! It’s always a big concern when you play a song that nobody has ever heard for the first time live, ‘Will it Bomb..? Will the crowd take it in..? It was the true highlight of the show for me, you could see the anticipation in the crowd when ‘Sy Keeler’ announced the song and as soon as it kicked in, there was a ‘Wall of death and a Huge pit kicked off, it was amazing, I’ve never witnessed that kind of reaction to new, unheard material before.. truly honoured! All in all ‘Bloodstock Festival’ was the massive success for Onslaught and it will be a huge kickstart for this next phase of our career.”

Foscor stream of the “Les Irreals Versions” release in full is available!
Rivers Of Nihil released the new music video for the song ”Where Owls Know My Name” premiered via Apple Music!