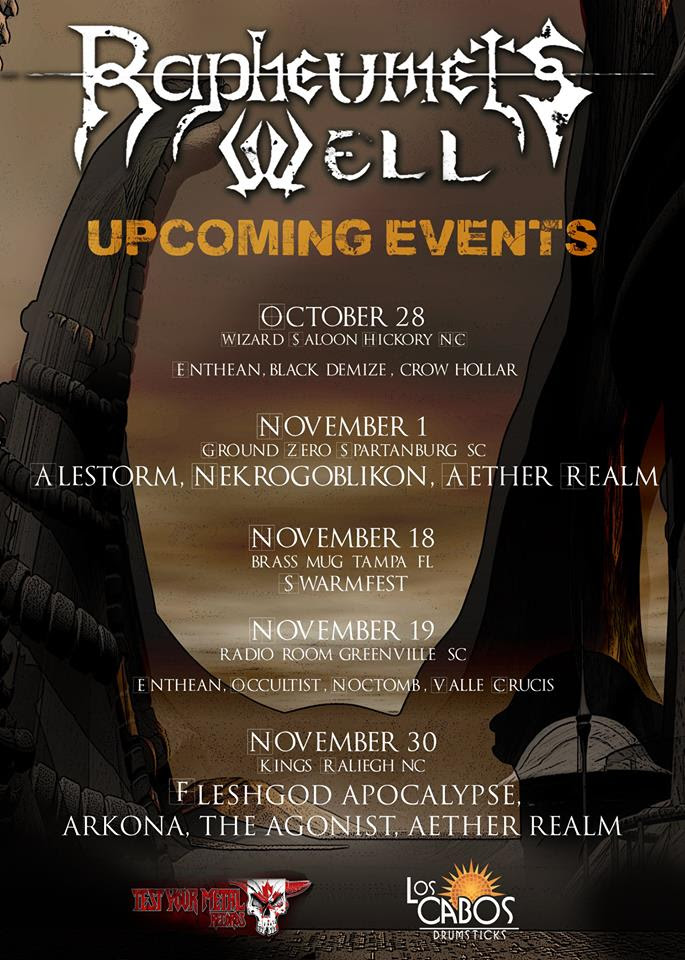 Hickory, NC based sci-fi metal contingent RAPHEUMETS WELL announce they will be performing the following show dates in October and November, which includes support slots on November 1st with Alestorm, Nekrogoblikon and Aether Realm in Spartansburg, SC and November 30th with Fleshhgod Apocalypse, Arkona and The Agonist in Raleigh, NC.

RAPHEUMETS WELL released their latest album ‘The Exile’ via Test Your Metal Records this past March.

To listen to the full album stream of ‘The Exile’, please visit the following link:

Blending a sound that is a complex mix of classical orchestrations, cosmic synths, and extreme metal to portray the epics of parallel worlds, Hickory, N.C. based RAPHEUMETS WELL (Ra-few-mets) bring forth a voyage enriched with lore, fabricated from scratch to show the depth in which represents them as artists.

Formed in 2008, 2011 and 2012 saw their first two demos followed by their first self release full length ‘Dimensions’ unleashed in 2014 that progressively told a larger story portrayed in a complex saga of Atai (ancient architects) who aid in the propagation of sentient life throughout the multi-verse.

From the birth of organic matter to great wars that tear the fabric of space/time, the story of RAPHEUMETS WELL‘s music serves to immerse you into a world of oddities, which is now continued in the band’s sophomore release ‘The Exile’ which debuted March 18th, 2016.

Inspired by the fictitious universe of Sovael, RAPHEUMETS WELL is the name coined to the conscious deity who oversees the anastomosis of the multiverse, the master of portals and inter-dimensional travel. Being personified as a trickster, Rapheumet often creates chaos for unsuspecting voyagers. The word “Well” refers to the gravity wells, which like black holes, are catalyst of change and gateways between the cosmic plains.