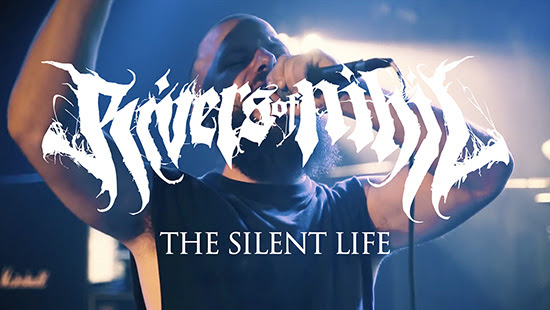 Rivers Of Nihil  released a music video for  the song ”The Silent Life” taken from the bands latest release”Where Owls Know My Name” via Metal Blade Records.

Statement of the Brody Uttley about the music video and the song:

“This live music video for ”The Silent Life” was filmed by the kind folks over at MyGoodEye Visuals in our hometown of Reading, Pennsylvania on the last date of our recent headlining tour. We had our good pal Zach Strouse playing live saxophone with us that night so it seemed like a great chance to catch some footage. As always, working with David Brodsky and his team was a blast. We hope you enjoy.

We will also be embarking on our second European tour late this November with our friends in Revocation, Archspire, and Soreption. We will be playing a nice selection of new tunes as well as some old favorites. Come out and get in the pit!”

Rivers Of Nihil  will join Archspire, Soreption, and label mates Revocation for a European tour in November/December. See below for all dates!

Check out the music video for the song called “The Silent Life” here, enjoy it:

Seth will release a new record in 2021, released the teaser for it!

Toxaemia premieres the official lyric video for the “Hate Within”, awake your hate through the destructive sounds of old school death metal!

Kickin Valentina will release new upcoming record ”The Revenge of Rock” in January!

Merrimack embarks the Japanese tour with Marduk!
Alestorm and Skálmöld are going to held a concert in Belgrade on November 28th!