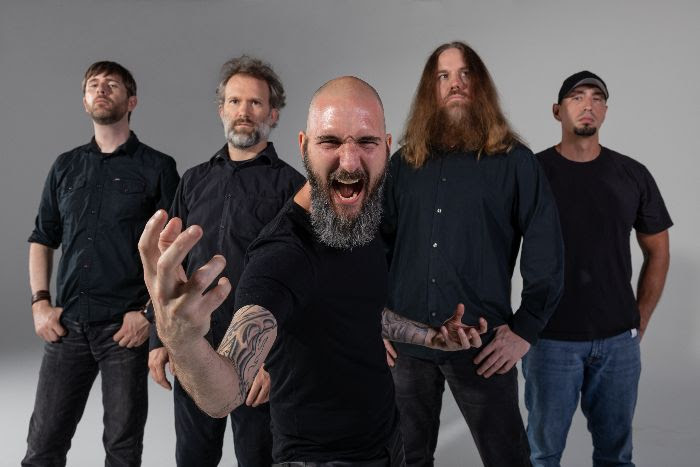 Austin progressive power thrashers Runescarred have released a video for the acoustic version of their song “Swallow Your Tail”. This song is from the expanded edition of their record ”The Distant Infinite”.

“Swallow Your Tail” originally came into existence as a weighty, down-tuned dirge but in its acoustic form we have gone for more of a Dead Can Dance vibe, complete with Eastern spices and blues/jazz touches from the slide guitar and piano. We shot this video in the same studio that we recorded the track and we feel we effectively captured on film the somber and resigned mood of the lyrics. We’re especially proud of this one!”

Combining epic, soaring clean and guttural, harsh vocals with powerful instrumentation, the band deliver a dynamic sound. The quintet’s composition draws upon grounded metal attributes but elevates their music through incorporating their distinctive identity. Whether delivering a hard-hitting metal track, or delving into a softer acoustic piece, the band pour utter emotion and storytelling into the heart of their sound.

There is even an element of theatricality to their sound that elevates the atmosphere. From ludicrously intense shredding and melodic riffs to ethereal acoustic melodies, their music reaches another level. Runescarred bring an exhilarating contribution to the world of metal, developing their music through inspired compositional techniques and performances. This re-release with new material celebrates their achievements and provides a glimpse into the band’s continuing evolution.

Order for the new record: ORDER THE DISTANT INFINITE HERE

Check out the acoustic music video for “Swallow Your Tail”, below: