Are you ready for the blood eagle, the inevitably horror of Viking history – to hear the sounds of death powered by notorious essence of uncompromising death metal? Then you are going to have a lot of bloody fun, coming your way. Starting with some apocalyptical powerful intro, this song is a promising one – that will get the atmosphere heated. And it is one hellish and powerful intro, that is completely adapted to the rest of the song in the most authentic and unique way.  It is quite strong intro for the song, highly produced and arranged perfectly – to have this clean sound, followed by doomsday atmosphere. That gives a best quality to the rest of chaotic parts of the song, that are unique as this intro, as well. Drum set, multiply riffs, vocals, melodies are symphonized greatly, every detail pointed out to the max – with some blasting fusion to it. Coordinated and balanced in precise and ideal way. 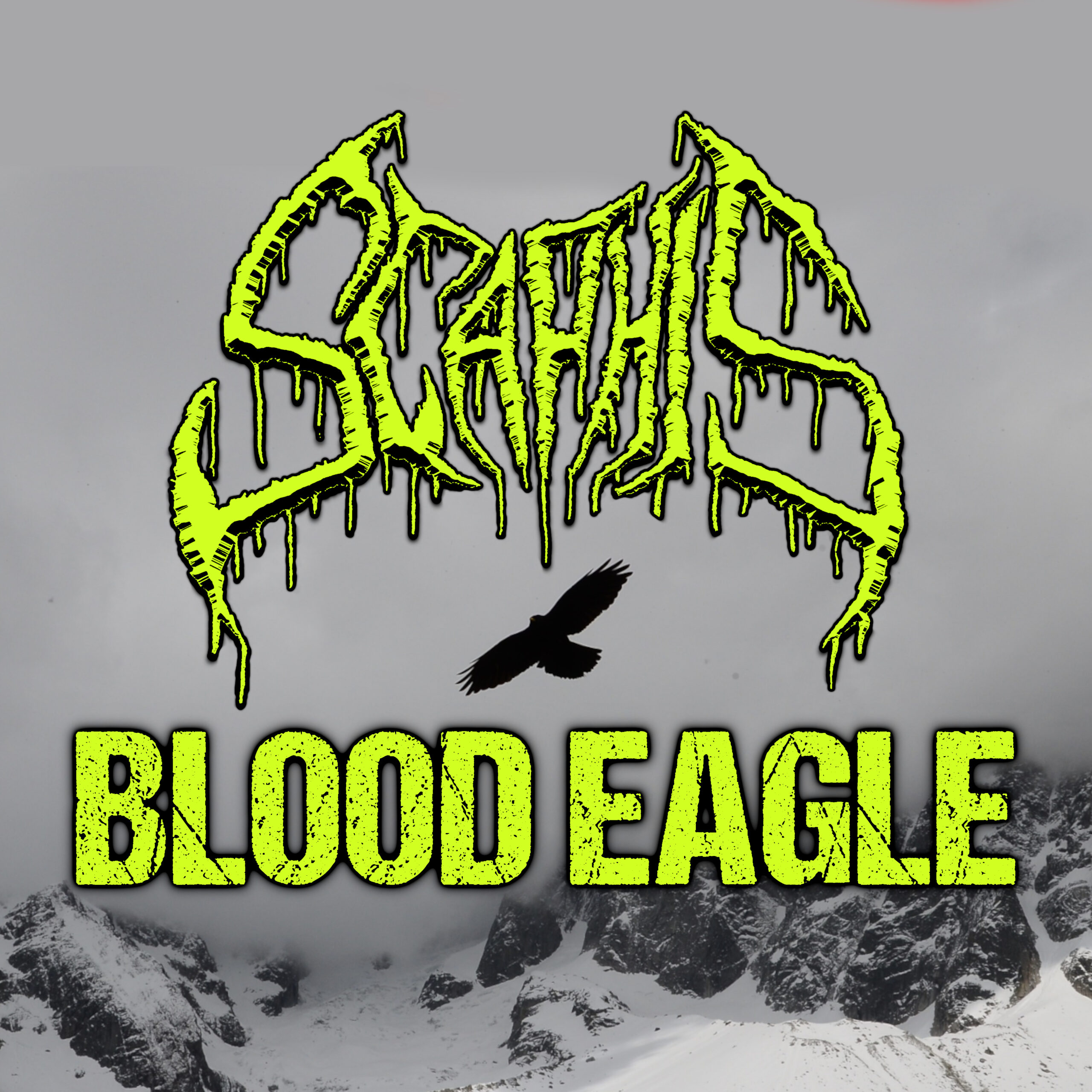 Then the ferocious and vicious attacks of crushing riffing begins. And they are adapted and arranged – with the vocals of Spyke Jagerkrieg in outstanding way, riffs and vocals just sliding into another – with this fast/insane tempo – showing the awesome balance between them and some catchy coordination. Showing how this song is just pure quality of death metal brutality, that has all of the best aspects of death metal, but also melodic death metal, as well. Since it is a fusion of those two, one complex and special fusion of those two genres.

There are many layers in various passages of the song, that are cleverly produced, arranged – but mostly coordinated and balanced in such masterful way. Each part or passage shows the changes of the atmosphere in the story, this presents that the guys from the band – paid attention to story itself, as well. And this gave the song most sinister and brutal vibe – in this glorious Viking war manner.

Every detail – along side with passages are coordinated and balanced, more that good. Mostly each detail from melody, multiple riffing patterns shows this clever adaption – that creates this one brutal peace of destruction in whole. Presenting the taste of death metal in most existing and honest way. Especially this Viking death metal, as well as the melodic death metal influence. Even the story is presented uniquely – with horrific atmosphere that follows it. The story and technical part are in this case, journey through great approach towards music, that shows how it sounds to be dedicated – with your soul and mind fully – to the whole aspect of brutality itself and understanding it, both by sound and story. This guys completely put themselves in the song, showing how they understand the genre called death metal, completely.

One of the most intriguing passages of the song is this sharp and fast riffing – followed by this melodic sound, that is the same as the riffing part of the song. And it is followed by this insanely fast and perfect drum set. This passage shows the full intensity of the song, raging death metal essence – that made this song such a devastating crusher, as it is. It made it also intriguing, that will keep the attention of particular listener.

Vocals by Vocalist Spyke Jagerkrieg are more than great. She basically balanced her growls the whole time, to sound low – but fast at the same time. Her coordination of growls fits in such destructive and amazing way – with the whole song. Not to mention that she has the high quality growls like Angela Gossow from Arch Enemy. That tactical approach in her voice presents this more that unique death metal experience. It reminds of old school death metal vocal approach, that she implemented successfully in this song – with the vocal capabilities like Angela’s, as well.

The best passages in the song are this crushing ranging riffs, that are followed once again by hard/brutal riffing. That are the best parts/passages of the song – that are sliding into another.  Not leaving space, for slowing down. That is what death metal is all about, not slowing down. This band presented for sure – it’s main essence and quality in best way. In the second passage there is this mix of black metal elements – with death metal chaos. And this improved the quality of the song, making it more dark, sinister and just brutally good, as it is.

There are several riffing patterns in the song and they all fit extremely well – with each other. Each listener will find it’s own favorite riffing part. Because of it, the song is very diverse – not monotonous, like most of the brutal death metal songs, can be. This riffs also showed the great potential of the band, that know how to deliver one wicked death metal song.

Melodic death metal influence in the song  – is one more plus in technical terms. The melodies in the song made this atmospheric effect – that added aural color to the song. Dark and twisted aural melodic color, that didn’t reduce the power of brutal death metal structure.  It made it just interesting, authentic and untypical, also a true Viking warrior death metal song – like Amon Amarth knows to create.

The influences in the song are between the Arch Enemy and Amon Amarth. It is a fusion of those two – with surprisingly special approach, that creates this ultimate melodic death/brutal death metal journey. It is so amazing to hear, that the band used this approach – to put the best sides of those two bands in their music. The results of this influences and fusion is death metal mastery – that has a deepness to it, that catchy quality of death metal essence.

There is the story, as well. Wicked Viking story of punishment. Like the song says Blood Eagle was a cruel punishment, that has been done to Christians and in general enemies of Vikings – or traitors. The punishment was very horrific. The punished one was sentenced to death, where her/he was tied to a pillar/some sort of device , where her or his lugs – were pulled out from her/his back, also separating the victim’s ribs from their spine – before that.  And once again the band did such a great thing, to tell this kind of story. The idea for it, was just authentically presented. Real and true horror story, that goes along amazingly – with death metal structure of the song. The guys from the band, give it life. To be told and spread – in the glory of Viking death metal. The band nailed it completely – with the whole uncompromising and unique technical approach, one of a kind fusion of melodic death metal and brutal death metal. Their originality showed the best of death metal essence, which resulted in creating blasting and powerful death metal crusher, that has the true warrior Viking spirit. This is a crushing death metal song – for all of the brutal senses, that presents brutality of death metal in most original manner.

Witness the horror in the most darkest colors of death metal.

Guitarist Josh Ristrom states this about the new song/lyric video:

“This song has one of my favorite choruses within it! It has a more raw edge, even dabbing into some black metal elements”

“While it has a more traditional song structure than our other releases, it shows the power of a good riff”.

Scaphis made an impressive debut with their album ”Rituals of Torture and Death” in 2017 followed by a string of national shows including support slots for Bloodbath and Sinsaenum. ”Blood Eagle” stands as a powerful follow-up to the successful release of their title song  ”Dissected & Fermented”. And with their sophomore album on the horizon and a year jam packed with shows, Scaphis are set to reach new heights in the heavy music realm.

Recorded and mixed by Chris Themelco of Monolith Studios

Mastered by Thomas ‘Plec’ Johansson of The Panic Room (Sweden)

Check out the premiere for lyric video of “Blood Eagle”, below:

The Chronicles of Manimal and Samara (TCOMAS) premieres the new song for ”Shaman”, find the true spirituality and awake your subconsciousness, through the divine aural form of art!
Statement released music video for “Dreams From The Darkest Side”!