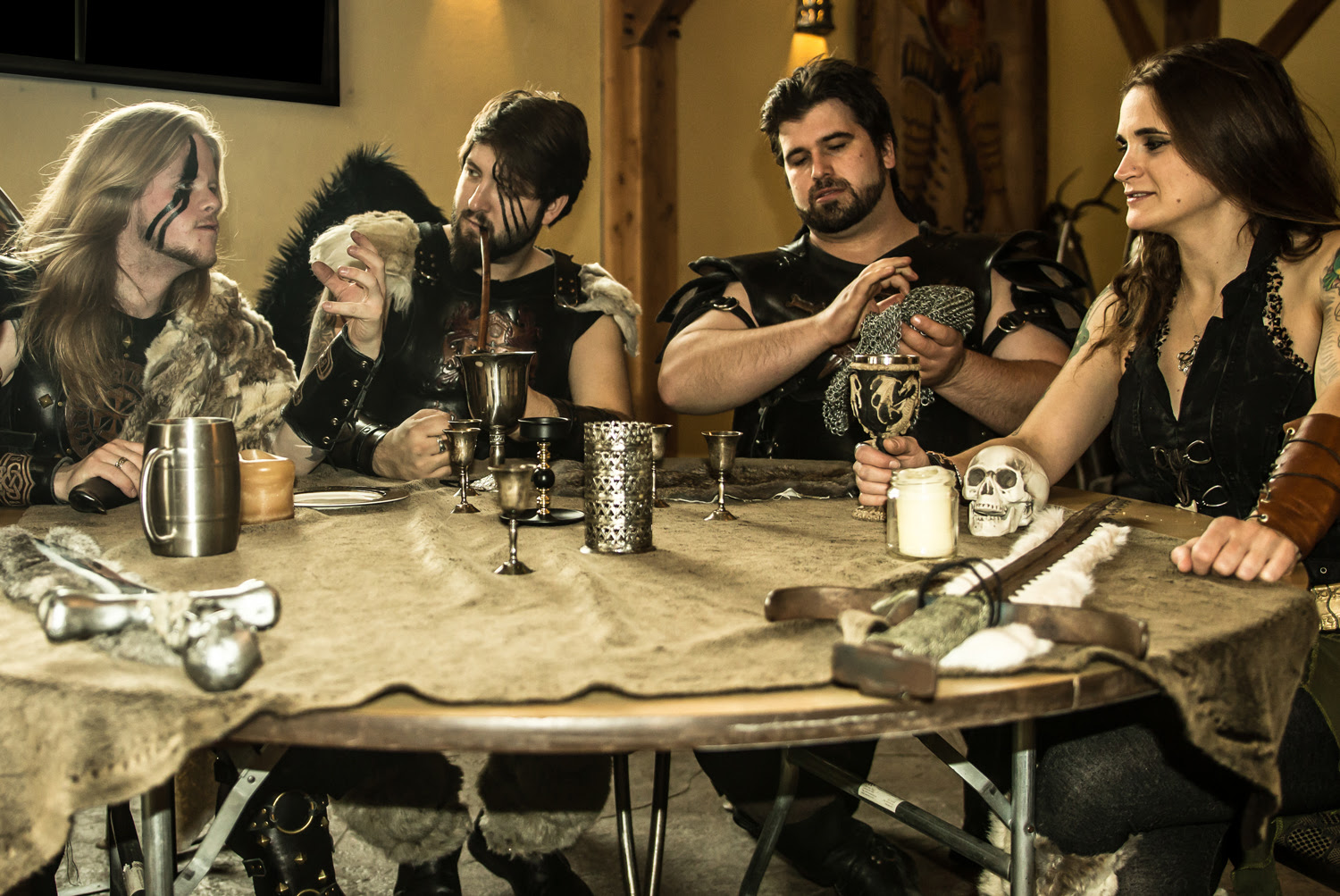 Canadian progressive/power folklore metallers SCYTHIA announce August show dates, which will include supporting Brazil power metallers HIBRIA for their Calgary tour stop on August 12th plus a performance at this year’s Metalocalypstick Festival in Valemount, BC on August 27th. Metalocalypstick is a two day non for profit festival formed to support women in metal, punk, hardcore and heavy bands. All bands on the fest line up feature one or more FEMALE member that are all Canadian and all power with special out of country guests Brazil’sNERVOSA headlining. 2% of proceeds from the festival will be donated to Girls Rock Camp and Vancouver Rape Relief and Women’s Shelter. Full details and line up can be found at http://www.metalocalypstickfest.rocks.
Scythia recently released their newest full-length offering, Lineage’, available digitally and on CD via the band’s Bandcamp page.
Although the band primarily self-produced the album, Lineage features engineering from Nino Laurenne (Firewind, Finntroll, Wintersun, Ensiferum) and Lasse Lammert (Alestorm, Gloryhammer, Powerwolf), and mastering from Svante Forsback (Rammstein, Volbeat, Firewind, Apocalyptica). Nino Laurenne is also responsible for mixing duties on the album. Lineage was recorded at LSD Studios in Lubeck, Germany and Sonic Pump Studios in Helsinki, Finland.
Upcoming Dates:
Aug 12 – Calgary, AB – Dicken’s Pub – info w/ Hibria

Like a charging bear Scythia have been playing progressive power metal with a twist of folklore since 2008. Scythia has coined their own sound while drawing influences from different genres such as celtic/gypsy folk music, power metal, death metal and progressive rock. Scythia’s albums and performances feature rich, poetic storytelling and grand tales that vividly captures the imagination of their listeners. Because of this, they have taken the independent scene by storm as they gather more and more fans both domestically and internationally. Scythia acquired its name from vocalist/guitarist Dave Khan’s infatuation with ancient Slavic imagery and melodies inspired from Balkan music. The name is fitting for a grandiose sound as Scythia is also an ancient empire spanning from the Caucasus through Russia, and even into eastern Scandinavia.

Scythia delivered their first album “Of War” in 2010 where the band’s distinctive sound was forged, which carried on to their next release “Of Exile” in 2011. These albums featured sound effects, narration and classical instrumentation to help drive home their story through the medium of concept albums. Touring and press associated with these albums garnered recognition for the band as they were nominated for the Best Metal Group/Duo for Canada’s Sirius XM Indies – Independent Music Awards. Other nominees include Bison B.C, Derelict, Devin Townsend Project and Mares Of Thrace. This is a great honor for the band to be included as nominees for these awards since they represents the Canadian independent music scene.

In February 2014, Scythia had its sights set on new and larger horizons. They released their 3rd full length album “Of Conquest”, which was engineered/produced by Lasse Lammert (Alestorm, Gloryhammer, Halcyon Way, Svarsot) at LSD Studios in Lubeck, Germany. Co-produced by Shaun Thingvold (Strapping Young Lad, Lamb of God, Fear Factory), Mixed by Nino Laurenne (Ensiferum, Wintersun, Kiuas, Firewind) at Sonic Pump Studios in Helsinki, Finland, and Mastered by Svante Forsback (Rammstein, Firewind, Korpiklaani,Apocalyptica) at Chartmakers in Helsinki, Finland. “Of Conquest” let to an overwhlemingly popular response and saw the band co-headline a major festival in Brazil and other festivals in the southeast USA in 2015.

“Of Conquest” sonically paved the way for their 4th full-length release “Lineage”, which was recorded using the same production team. 2016 sees Scythia getting ready for more touring in Canada and the US, and setting sail across the seas to international venues.