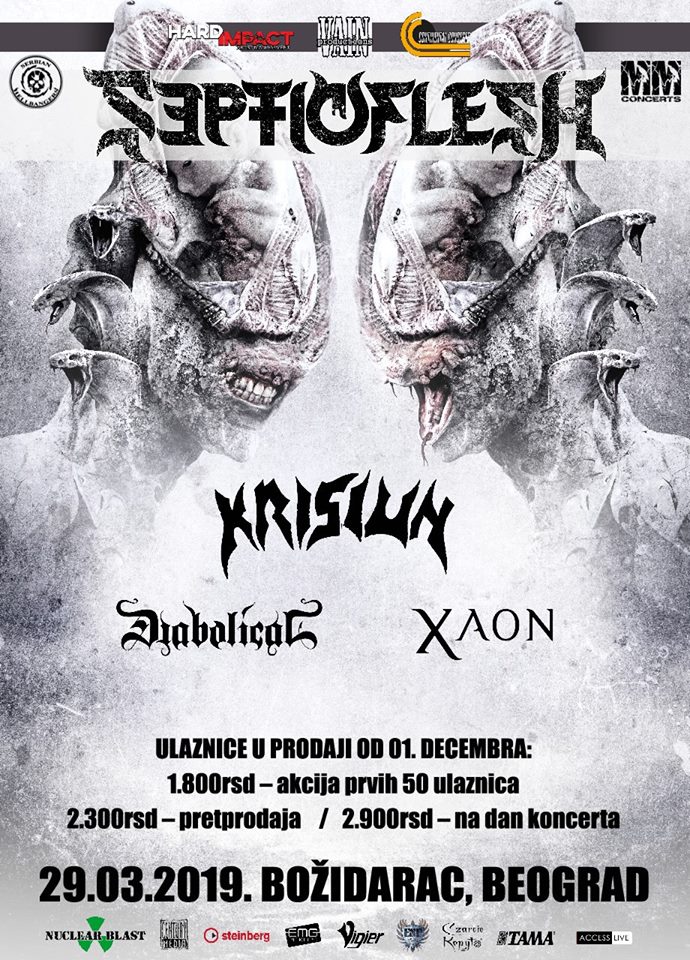 Septicflesh and Krisiun will perform in Belgrade/Serbia on March 29th, with Xaon and Diabolical at Bozidarac. The show was planned to be held at Dom Omladine, but the organizers Serbian Hellbangers and MM Concerts changed the location for it and it’s Bozidarac, now.

SepticFlesh are from Athens, and were formed in the 90’s. After a demo entitled “Forgotten Path” and a Mini Lp called “Temple of the Lost Race” they managed to attract the attention of the French label Holly records, gaining access to the wider underground scene.

Their first full length album entitled “Mystic Places of Dawn” was recorded in April 1994 and gained a very positive response.  So far, the band has recorded a total of 10 studio albums, of which the phenomenal ”Codex Omega” was released last year.

Since 1990 brothers Alex Camargo, Max Kolesne, and Moyses Kolesne from Krisiun have imbibed heavily in the deadliest form of metal known to mankind and they were formed in Brazil. They are brothers in death metal. Literally. In fact, there exist few bands that embody the genre quite like Krisiun, who celebrate 25 uncompromising years with the release of new album, Forged In Fury.

More than twenty years after their formation in northern Sweden, innovative blackened death metallers Diabolic proved to be more vital than ever and puts forth release “Eclipse”, a concept album reflecting on the dark side of humanity that forces the listener to explore his own diabolical side.

The band appeared at many festivals, toured the UK and toured Europe supporting Borknagar in 2016.

On their previous release, the ‘‘Umbra” EP (2016), Diabolical continued to craft inventive music, moving seamlessly between crushingly heavy and dark to delicate and ethereal. But ”Umbra” was a mere foreshadowing of what was to come. Produced again by vocalist/guitarist Sverker Widgren at Wing Studios in Stockholm, the new and 6th album ”Eclipse” picks up where ”Umbra” left off and once again Diabolical manages to top their previous efforts.

Xaon, an elusive name born amidst Switzerland’s highest mountains. Never quite fitting in any of the numerous galleries metal has to offer, drifting through the extremes whilst juxtaposing finesse and vehemence from an unworldly orchestra, endlessly exploring the vast echoic gloominess of the human mind.

In only a few short years, the combo led by Vincent Zermatten (guitars) and Rob Carson (vocals/orchestrations) has managed to tour the world through the release of their critically acclaimed debut album “The Drift”, notably across Europe with gothic metal monsters Sirenia and folk metal legends Tyr, in Japan with Obscure and Archspire, in the US with The Veer Union, and sharing the stage in festivals across Europe with bands such as Megadeath, Testament, Exodus, Gojira, Paradise Lost, Eluveitie and many more.

In 2019, Xaon is back with their 2nd album somberly entitled “Solipsis” available through Mighty Music Records, bringing the band’s grandiose aggressiveness to a whole new level, pummeling their way through a cataclysmic atmosphere while reaching a new majestic apotheosis. This album is set to debut in the spring, which will see the band performing across Europe with Septicflesh and Krisiun while continuing to prove themselves as an upcoming force around the Metal world.

The where on sale from December 1st, at a special price of 1,800 dinars for the first 50 tickets, while the regular pre-sale price is 2,300 dinars. On the day of the concert it will be 2,900 dinars. Concert is organized by MM Concerts and Serbian Hellbangers.

Check out the full live performance of the Septicflesh at Los Angeles in 2019 here, enjoy it:

Check out the live performance of the Krisiun at 70000 Tons of metal cruser performing “Blood of Lions” here, enjoy it:

Check out the live performance of the Diabolical at Rockstadt Extreme Fest here, enjoy it:

Check the live performance of the Xaon at Netherlands here, enjoy it:

Wolfheart to Kick off North American Tour with Children of Bodom and Swallow the Sun today!
The official schedule for the Riverside concert is revealed!