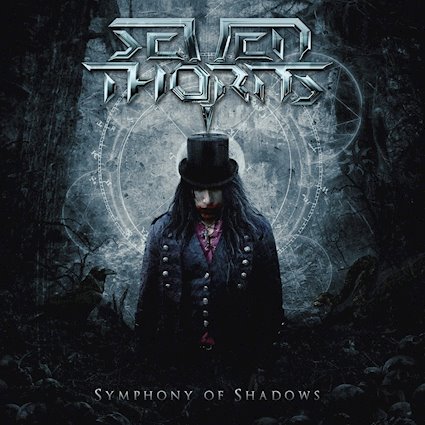 The song starts with a lullaby, and then it goes on with some blast fast riffs which is just a perfect switch, from silent to explosive sound. Whole song is very complex, it has that melodic and symphonic influences, that are in perfect balance with the blast riffs, also the fast tempo of the song. The keyboards and solos in some parts of the song have that divine not of this world sound, with a progressive sound and elements to it, that are so perfectly blend into the whole song, all of this is just a dark melodic fairy-tail that present’s the beauty of darkness in it’s true colors, also true lyrics as well, making it a melodic masterpiece. At the end of the song their are a female vocals, and with her beautiful voice mixed with some crushing riffs adds to a song, some divine flavor, ends in a amazing way. Symhony of Shadows has never sounded darker and more melodically beautiful.

Denmark’s finest Power Metal band, Seven Thorns, begins a new chapter, with the release of their 3rd album “Symphony of Shadows”, released in November 2nd!  Spicing up their sound with heavier, darker influences like Symphony X and Adagio they still remember their roots in neo-classical and classic Power Metal in the vein of Helloween and Stratovarius. The result is strong, catchy melodies, high-end technical musicianship and a massive, dark and rich sound, and the 9 tracks will leave the listener gasping for air yet yearning for more!

Mads – Bass player states this about the music video/song:

“The fear of, and the fascination with, destruction reside simultaneously in most of us. The vampire myth gives a face to the thrill of stepping close to the edge, of losing control and of our secret wish that our end will turn out a new beginning. The treacherous voice in our heads, leading us astray, bringing us into the danger zone, how come it sounds so sweet? Like music. From the shadows come the siren call for self-ruin”

Having played numerous gigs and festivals including the prestigious CopenHell, blowing away audiences and critics alike, and having shared stages with bands like Primal Fear and Freedom Call, the band is a force to be reckoned with.

Statement of the Guitarist Gabriel Tuxen about their release and the live performance:

“We wanted to make an album that was fun for us to play on stage, and one that will entertain our fanbase as well as people who see us for the first time. I think we succeeded, and more.”

To enhance the darkness and heaviness of the album, Seven Thorns worked with famed producer Tue Madsen. He turned out to be the perfect partner to make the vision come alive, making sure that every detail in the complex soundscapes stand out clearly, still creating a wall of sound full of pummeling bass drums, heavy guitars and soaring solos that will satisfy even the most demanding shred-fetishist.

Check out the premiere for the lyric video for the song called ”Symphony of Shadows: