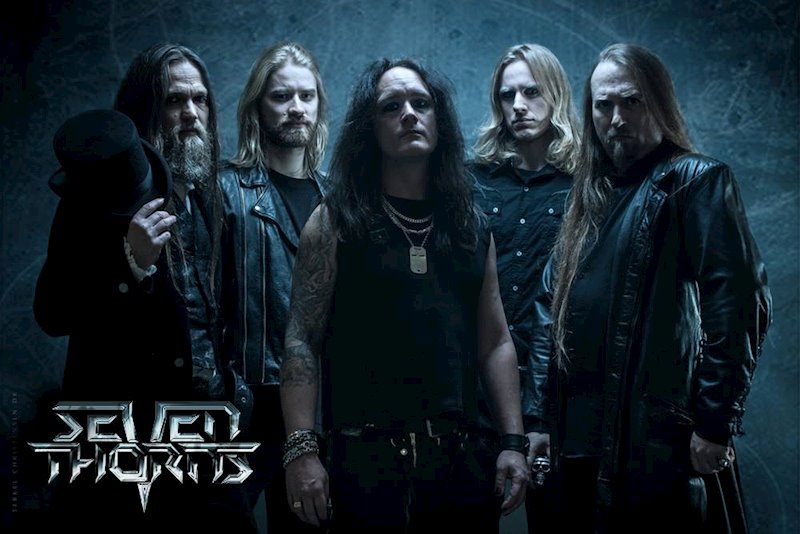 Danish power metallers Seven Thorns premieres  the music video for the song called “Beneath a Crescent MoonWithin” which is out today, from their new album “Symphony Of Shadows”, which was out, via Mighty Music Records!
The band stated this about the song and the music video:
”When Gabriel [Tuxen, guitar] came up with the riff and the first rough drafts of “Beneath a Crescent Moon”, we immediately felt it had potential as a single. It’s a strong, catchy melody and a heavy riff, and it gets stuck in your head and stays there! The song is about love, and about the freedom to choose for yourself in life. We don’t care what cultural, religious or other reasons people use to oppress others, we are against it. Everybody should have the freedom to choose for themselves, without the fear of oppression, especially from their closest family and friends, but also from society in general. In the video, you see a young girl in love, whose nightmares are of violence and oppression because of her love. But don’t worry, it has a happy ending”.

Denmark’s finest Power Metal band, Seven Thorns, begins a new chapter, with the release of their 3rd album “Symphony of Shadows”, released in November 2nd!  Spicing up their sound with heavier, darker influences like Symphony X and Adagio they still remember their roots in neo-classical and classic Power Metal in the vein of Helloween and Stratovarius. The result is strong, catchy melodies, high-end technical musicianship and a massive, dark and rich sound, and the 9 tracks will leave the listener gasping for air yet yearning for more!

Having played numerous gigs and festivals including the prestigious CopenHell, blowing away audiences and critics alike, and having shared stages with bands like Primal Fear and Freedom Call, the band is a force to be reckoned with.

Statement of the  guitarist Gabriel Tuxen about their release and the live performance:

“We wanted to make an album that was fun for us to play on stage, and one that will entertain our fanbase as well as people who see us for the first time. I think we succeeded, and more.”

To enhance the darkness and heaviness of the album, Seven Thorns worked with famed producer Tue Madsen. He turned out to be the perfect partner to make the vision come alive, making sure that every detail in the complex soundscapes stand out clearly, still creating a wall of sound full of pummeling bass drums, heavy guitars and soaring solos that will satisfy even the most demanding shred-fetishist.

Check out the premiere and the stream of the music video for the song called “Beneath a Crescent MoonWithin” here, enjoy it: