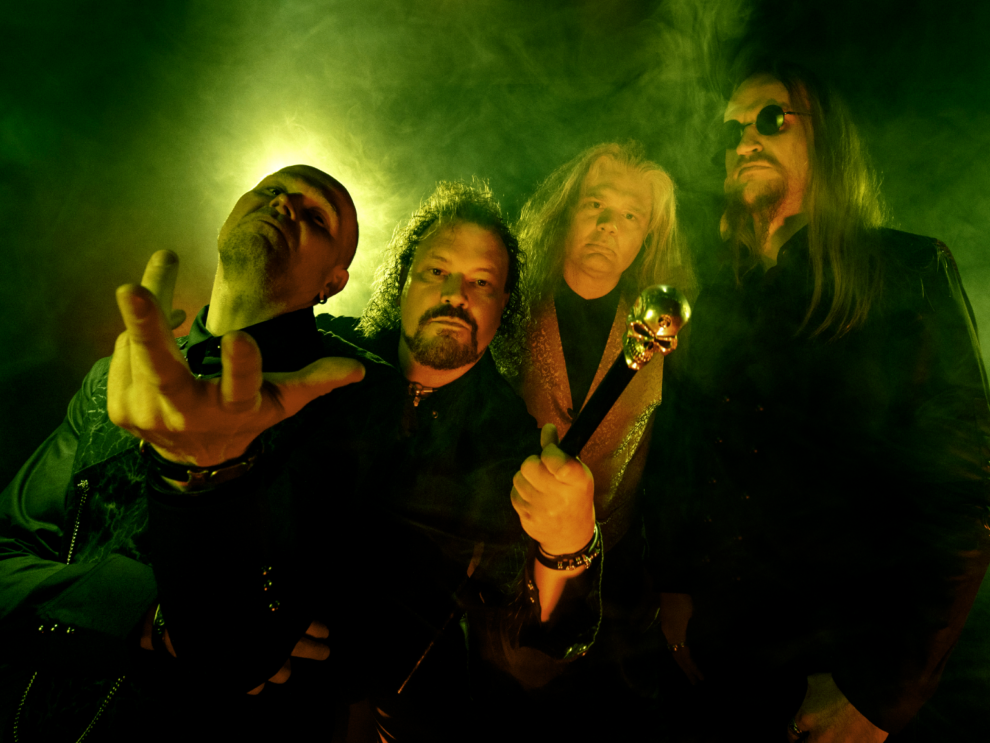 Danish rock lords Sliver Phantom premieres music video for “We Sing Along” , taken from the upcoming record “Crimson Cabaret”, which will be released on October 28th, via Uprising! Records.

Once again Silver Phantom delivers high class rock n’ roll that rolls and has some fierce, energetic rhythm section that has all of the best trades of rock. Starting with some doom atmosphere and some interesting theatrical and vocal performance by Vocalist Martin Helgren – followed by some smooth guitar sounds. That means that this song is a promising one, that delivers only diversity in sound and creativity in interesting and great way.

Then things got bombastic – with blasting/heavy hard rock riffs, arranged in that usual classical hard rock manner – that is always a winning combination for every rock song. Technical part is so smooth and perfect and diverse, that is quite great to hear this aural diversity everywhere. Every part sounds different – with such outstanding coordination and balance, that is followed by this explosivity and high energy impact by the band – that shows how this song is a true rock banger, that actually bangs hard. Arrangement’s for the song of every passage and part – are done in precise and perfect way. The best example is the switch from the first riff pattern to the next, that is also good as the first way.

The most best think is that no change in the atmosphere has happened, the groove stayed the same and in technical terms the passages slide in clean way. Sounding so refreshing, without any unnecessary distortion, just the same background – that added this spin, but the elements stayed the same. Job well done – with such clever adaption and arrangement, making the song even greater. Even the arrangement’s for the catchy and melodic chorus part and theatrical part are masterfully done. Adding the necessary dynamic and quality to this song – not sounding to different, blending in with the whole song.  Melodic element’s have this excellent groove, that adds some spirit to the song – giving it this aural divine effect. This is one more good trade of many – that this song has. Solos at some part of the song are insanely good – with divine guitar shredding, making the song just perfect example of great rock song.

Martin’s vocals and performance were quite great, especially the theatrical singing style that made this song even more special. He has this authentic voice, that is balanced and coordinated and amusing at the same time. Which gives the song more greatness and catchiness.

Catchy choruses – with the ones at the end of the song added that interesting and amusing effect. That added more explosivity to the song, that is already explosive enough. Resulting in this song being a rock banger of fierce energy as it is.

The story of the song is about todays apocalyptical  atmosphere and events, leading to apocalypse. About singing along with destruction and with choirs of society. And the mindset of society pulling us to our end. Sarcastically presented through lyrics, how we as human race will sing along – even if we destroy ourselves. Even in the video there is this occult scenery – that presents from the top of the leading hierarchy – how we have destructive leaders with stupid mindset. And human race becoming like them, worshiping their corrupted occult ideologies. The guys from the band, presented it in such creative way and masterfully with technical side of it. That made it a ultimate rock song – with a bitter flavor of reality.

The video is done in such great way, good angles and costumes – surely gave this song a proper and perfect visual presentation. And images from the video followed the story in a good way, not standing out from the story.

This is one unique, interesting, sarcastic and amusing song. It has all of the trades of excellent rock song- wrapped in the most strongest and powerful colors of rock n’ roll. It is just refreshing – with specific approach, that makes this song an ultimate rock banger. And it has the spirit of rock to it’s core. Banging hard and fierce in true rock manner.

Sing along, through rock domination.

Guitarist Morten Madsen states this about the new song and lyrics for it:

”This song started with the idea of doing a short, quiet intro immediately followed by a heavy riff – a bit like Kiss’ ”Black Diamond” – and then to move into a big hook line chorus, but things didn’t go quite as planned. As usual the song soon went down its own twisted path and ended up being a rather different beast with a unique flavor.

The lyrics deal with how we all just tend to sing along with the big choirs of our society, and how easy it is to close our eyes and avoid taking any responsibility – even when marching towards the very end of the world as we know it”

“Balancing the more menacing verses with the melodic choruses the words make a somewhat sarcastic point of this musical contrast”. Being a complete band with extreme attention to visuals, the Danes have obviously also prepared a special eye candy for “We Sing Along”. “In the video, we try – in a fairly tongue- in-cheek way – to illustrate this scenario, as it would unfold in a religious fanatic murder cult… But in the end it’s just a treacherously melodic tune that sticks in your mind – So let me hear you sing it….”

Silver Phantom is a rock band that mixes a wide variety of subgenres to create a new, old-school vibe. The heavy riffing of hard rock and the raw energy of the punk scene from the ’70s meet the power of 80’s metal. The sound is further infused with singalong choruses and the playful genre-bending of the ’90s and the 2000’s power rock – all merged and combined with theatrical shock rock.

The lyrical universe is drawing its inspiration from dark and dreamy horror stories across mysticism and ancient legends to the movements of the heavens, and presents you with a powerfully blended cocktail to entertain your rock’ n roll soul!  Silver Phantom gives you a different take on what rock music sounds like when it’s a unique mix of heavy rock, punk rock and power rock – all merged and combined with theatrical shock rock.

The band emerged when co-founders singer/bassist Helgren and guitarist Madsen wanted to make some good, old-fashioned rock noise with a twist. After writing hooks, riffs and songs together for a few years they were ready to complete the lineup with drummer Kim Kvist and lead guitarist Mads Møller in 2019.

Check out the premiere for music video of “We Sing Along”, below: