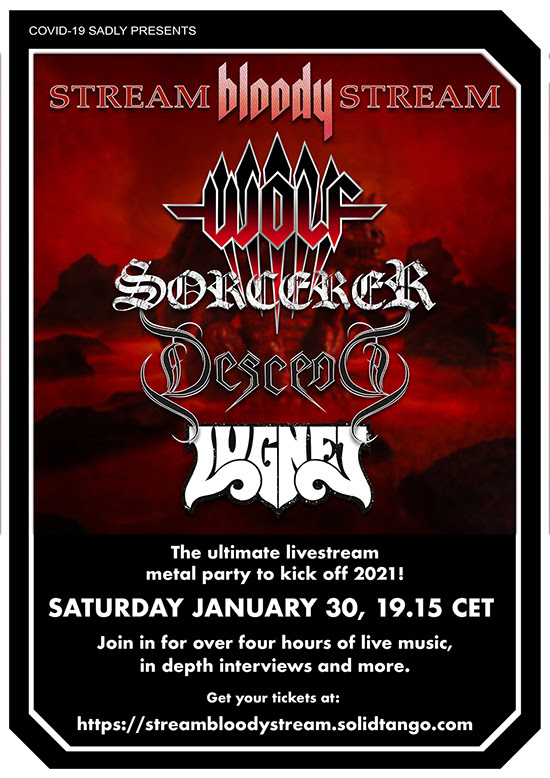 With the pandemic putting a halt to concerts and festivals, an alliance of Stockholm’s finest metal has united to begin 2021 with a message of faith and solidarity!

On January 30th at 10:15AM PST//1:15PM EST//7:15PM CET, epic doom lords Sorcerer will join heavy metal legends Wolf, progressive death metallers Descend, and the tough, gritty 70’s-style hardrockers Lugnet for an almost 5-hour livestream: “Stream Bloody Stream”. From a professional stage setting in Stockholm’s famous Popskolan, each band will perform a 45 minute live set, and fans will be treated to a full-on invasion of their living room. During the change-overs, host Henrik “Henke” Brannerydh – known from the Swedish podcast “Rockpodden” – will take the audience for a backstage experience and interviews with the bands.

Tickets for “Stream Bloody Stream” are available via: streambloodystream.solidtango.com. Ticketholders will be able to replay the full stream for 48 hours from the start of the show.

Sorcerer released their third full-length, ”Lamenting of the Innocent”, last year via Metal Blade Records – which charted #18 in Germany, #30 in Sweden, #31 in Switzerland, and #72 in Austria, plus was named “Album of the Month” by both Deaf Forever and Rock Hard!

Since they first started, Sorcerer have been labeled “epic doom” – a tag that fits but does not define them, and this has never been more evident than on ”Lamenting of The Innocent”. On this record, the Swedish quintet return with a revamped lineup that includes longstanding guitarists Kristian Niemann and Peter Hallgren plus Vocalist Anders Engberg, joined by bassist Justin Biggs and drummer Richard Evensand – both of whom bring something new and fresh to Sorcerer. This time around, the band let their influences shine through, breaking up the epic doom with flavors of prog, post-metal, classic heavy metal and hard rock. The song “Deliverance” also features a guest appearance:

“They truly brought another dimension to that song and now it’s impossible to imagine it without their contributions, which is the way it should be when you bring guests in to perform; they are there to provide something you couldn’t do on your own.”

Stream and purchase ”Lamenting of the Innocent” now at: metalblade.com/sorcerer