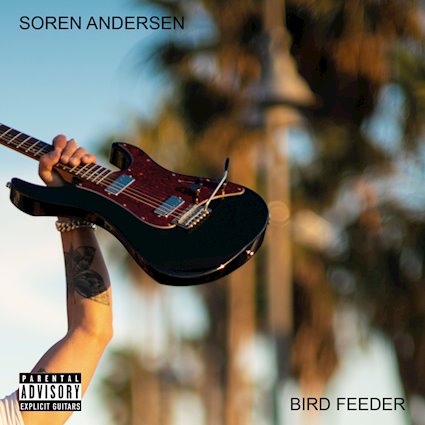 Soren recently released the music video for the “City of Angels”, which had that fast tempo, outstanding solos, and a background story that flows through veins with some divine sounds, but with this one Soren present a true masterpiece, that has a true power and spirit of the wild, with whole virtuous technical mastery, that will leave the listeners in the state of enjoyment.

Powerful melodies of this song, somehow present that true natural vibe of the forest, wild spirit, and the theme of the music video is also shoot at the location with threes and all the wild stuff around it at Randers Regnskov Tropical Zoo, animals, and of course mainly birds, and it’s perfectly fused with the song, as well the story of it.

Drum part of Chad Smith from the rock legends Red Hot Chill Papers is very well balanced with the whole song, and solo parts, making the song a true bird anthem that is wordy of listening. Soren’s style of playing music, reminds of the true solo guitar legend Steve Vai, both have that specific complex approach of playing music, and that is why Soren is so special and unique like Steve as well, and he adds that melodic flavors to his music, with true emotions to the song, every melody and rhythm tells the story of the song, also present’s the right emotions, because sometimes a great guitarist can present the true emotion, and story with-out vocalist.

The song it’self is cheerful, beautiful and relaxing for listening, which is also one more reason why it’s such an amazing song. Glenn Hughes did a great job with the bass part, it follows Soren’s solos and mastery, perfect combo of two rock masters, and that is not a surprise, because they collaborated for many years, and the result is godless music with the power of the nature by their side. The rock bird anthem followed by spirit of nature/wild has never been so alive, and divine.

With his new album, “Guilty Pleasures”, which is a guitar-oriented instrumental record Soren Andersen shows his dynamic and fluid playing and, above all, his surprising writing skills.

Soren Andersen states this about the new song:

“Chad came around my studio during the recordings of Glenn’s album “Resonate” in 2016. Chili Peppers were headlining Roskilde Festival that week and Chad decided to spend his day off laying down some drums on a few tracks for his good friend Glenn Hughes. After that session Chad and I became friends and about a year later, Chad was back in Denmark on tour with Chili Peppers texting me: Let me know if you need drums on any tracks […] So he came down and jammed for a few hours and one of those jams turned out to become Bird Feeder. I told Glenn about the track and as the beautiful human being he is, he offered to play bass on the track to complete the circle.

I love birds! I have a small bird feeder right outside my kitchen window and I love to look at them eating.  So I named the song Bird Feeder because of that, and we shot the video in a tropical nature park full of birds for the same reason”.

Soren is also a Producer, co-owner of famed Medley Studios in Copenhagen, ambassador for world class equipment like TC Electronic, Yamaha Guitars and Line 6 and of course playing the six strings with a bunch of other great musicians.

Check out the premiere of the music video for the “Bird Feeder”, here:

Anoxia premieres the music video for the “These Chains”, melodic rock/metal devastation that breaks the chains, and sets the spirits free!
Gwar returns to UK & Europe for November-December Tour, and releases a teaser as the announcement for it!