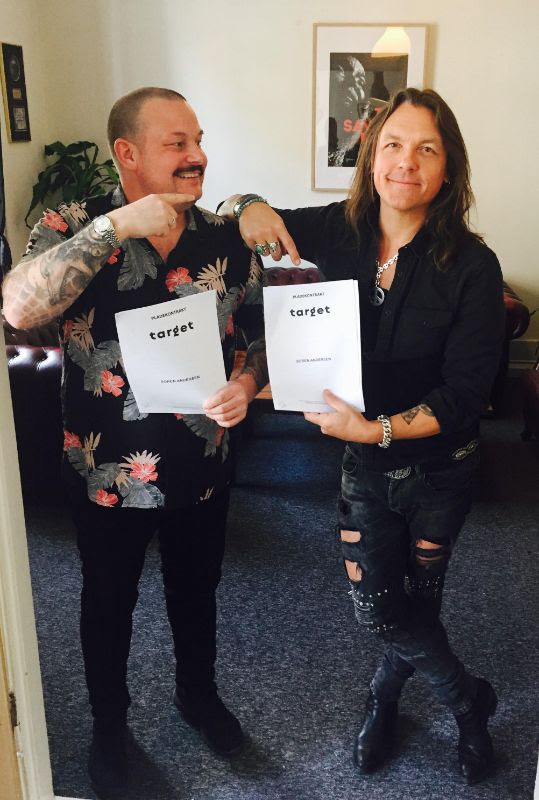 “It’s official! Today is a big day for me. Under the wings of Mighty Music, I’m releasing my solo guitar album in the fall of 2019. Ten tracks full-on melodic guitar rock featuring Chad Smith, Ida Nielsen and Marco Mendoza, just to name a few of those brilliant drummers and bass players who helped me doing this. Stay tuned for more info!”

It may seem like a late age to debut but 37-year-old Soren Andersen is absolutely not a novice, and during the past decade, the long-haired guitarist has built up to the solo album, ”Constant Replay”through jobs for artists like Glenn Hughes, Marco Mendoza and Dave Mustaine.

What?!? Who is that long haired guy next to the Deep Purple legend Glenn Hughes? That has been a common question during Mr. Hughes’ recent tours around the world, and the answer is quite simple: It’s Soren Andersen a phenomenal guitarist from Denmark.

Aside from being a skilled professional with jobs all over the world and being endorsed by companies such as Marshall, Yamaha guitars, TC Electronic and D’Addario, he’s also a lovable guy who just happens to have made his first solo album in the age of 37. And it is of course as brilliant as you would expect. This solo effort may have been buzzing in the back of his head for the last ten years, but it sounds as fresh and vibrant as it should, considering the basic tracks were recorded in just three days with a bunch of his friends from local neighborhood of Vesterbro in Copenhagen.

”It’s a snapshot of who I am right now” says Soren Andersen, looks carefully around the room and sort of whispers: ”And I think you can call it power pop.” Maybe. But it’s much more than that.

Soren is a great admirer of classic rock, and ”Constant Replay” certainly salutes those about to rock like they did in the 70’s. The album oozes of beautiful melodies, gritty guitar solos and enough energy to keep you up all night long. Soren respectfully nods at all his inspirations from Kiss to Hendrix, from Matthew Sweet to Fu Manchu, from Deep Purple to The Beatles, and he does it with a smile it’ll be difficult not to reply with an even bigger smile.

Soren Andersen is a lovable, long haired guy who loves both dirty rock and a little pop sunshine. He is also a musician who can put together a lovely tune, make it work in the studio and play it out loud on stage. And you can tell by listening to ”Constant Replay”, that doesn’t sound nowhere near a debut album. But Soren is of course nearly a veteran having played all over Denmark since his 16th year and in recent years with respected guys like Glenn Hughes, Dave Mustaine, Marco Mendoza and Tommy Aldridge.

In Europe he is also known for his work with Oliver Weers, Mike Tramp, Artillery and he has also produced a lot of Danish artists in famed Medley Studios, which he co-owns. It is also in the same studios he has mixed, mastered and produced ”Constant Replay” by himself. A true solo effort that tells a lot about Soren Andersen…

Soren is the guitarist of Glenn Hughes, Jesper Binzer (D-A-D) and has worked closely together with Mike Tramp for many years. Besides being a musician, Soren is also a highly acclaimed producer at his Medley Studio.

His new solo album, “Guilty Pleasures”, will be released in September 2019 on LP, CD and digitally.