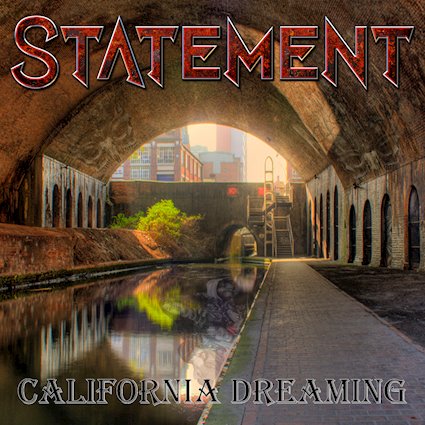 Danish hard rock/metal band Statement premieres the new music video of the cover song “California Dreaming” by The Mamas & The Papas, taken from their latest release “Force Of Life”  which was released in March 1st via Mighty Music Records.

The whole story of the song and music video is inspired by American President Donald Trump, and about his idea to buy Greenland about the political cynicism at it’s worst, using the resources of it and his reaction as well, after the request is denied to him . Story of the video is a ironic one about Trump’s ridiculous behavior, and the video start’s with that story followed by slamming riffs and drum set, that remind’s of the Metallica’s riffs.

This is also one truly amazing cover of the The Mamas & The Papas song, it’s different that’s for sure, it gave as a cover, total new perspective to it, the modern one, but also ironic. Interesting part of the song is melodic parts, which band wanted to be close to the original, as mush as possible. The song is also of their latest release “Force of Life”, and it truly has that rebellious force of life in it, like the rest of the songs on their new album. In the video it can be also seen that the band has masks also from the other politicians, it just an irony and parody of the system in America, but also a good massage to the world, to woke up, and see as how things are, not as the dream like the “Californian Dream”. Solos parts are fast and furious, technically perfect, and goes along with the drums, riffs as well in a great way.

Irony of the whole story, has it deeper meaning, as well as the warning that something needs to get changed. It’s interesting how the dynamic of the story changes in the video, it shows the full american lifestyle, and the media that points out the wrong facts about global things, which made video just spectacular and controversial, and goes with the song, the elements of it very good. Dream like your live Californian dream, until you woke up trough the sounds of rock/metal, and become free.

The band states this about the new music video and song:

“California Dreaming is the equivalent of the American dream and the American revolutions political X-Factor. What would it look like if various American presidents had a serious side job – as ROCK MUSICIANS for example? We are living in a society where popularity not necessarily equals talent – no matter your profession. Everybody is human, whether they are presidents or homeless, nevertheless, everyone has dreams, but every dream cannot be bought for money.Donald Trump says he does not want to visit Denmark, but did you know he visited Denmark with his rock band in the 60s, 90s, and present? The first time the sky was grey. The second time, all the leaves were brown. The third time he was trying to make America great again? Now the show is canceled because of Greenland. Maybe he was already thinking of buying Greenland for another California Dreaming back then? If you want the American dream, make it or take it”.

Check out the premiere of the music video for cover song “California Dreaming” ,here: