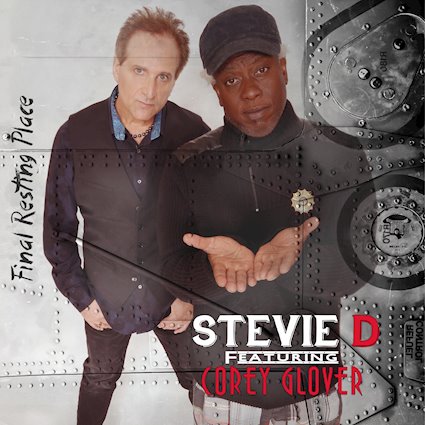 Stevie D feat. Corey Glover premieres the music video for the song “Final Resting Place”, which is taken from the upcoming that will be release in August, via Mighty Music Records.

The collaboration of two music stars/giants begins with this song, it starts with amazing vocals by Corey without music, and his vocals are just outstanding, he can sing without music so technically perfect, with a high range of his vocals, and with such enthusiasm, this is such a great intro to the song. This song is a mix of classical rock and elements of blues, with a groove vibe, which will make a listen dance all day, like there is no tomorrow. While listening further to the song, there is more and more tension to it, perfect vocals get more stronger with more emotions, and their is a divine and magical solo parts by Stevie D, which made again this song just the old school rock perfection and of course the vocals, the parts where the vocals got stronger and higher, also made it a perfection in a true rock style. Lyrics are about rebellion and life itself, all about fighting in life, and be a forever till the end, a perfect anthem of freedom. Rock fantasy with a true touch of classical rock power.

Corey Glover gives some insight of of the cooperation with Stevie D and the “Torn From The Pages” album. Rumors of live shows have hereby started!

Stevie D states this about the new song/music video:

Stevie D states this about the sign-up with the label:

“I am extremely pleased that Michael H. Andersen and Mighty Music are partnering up with me to deliver this music to ears and hearts of the music appreciating people of the world. This is a very important record for me and it represents a very powerful chapter in my life hence “Torn From The Pages””.

Stephen DeAcutis aka “Stevie D” has been working professionally as a guitar player, mixer, producer, multi-instumentalist, engineer, writer, and performer since the early 1980’s, having honed his skills and training under such studio heavyweights as Andy Wallace (Rage Against the Machine, Nirvana), Kevin Shirley (Led Zeppelin, Aerosmith), and Max Norman (Ozzy Osbourne) amassing credits that include such acts as Vanilla Fudge,Vinny Moore, Pat Travers, Carmine and Vinny Appice, Punky Meadows, and Cyndi Lauper to name a few.

DeAcutis states this about the upcoming new release:

“This record has been a long time in the making and I am very proud of the outcome and I feel this is some of my best work to date. Corey gave me the goods in his vocal performances and it is a blessing that he has given me his heart, soul and amazing vocal ability’s to represent my music. I am truly blessed”.

Check out the premiere of the music video for the song “Final Resting Place” here, enjoy it:

Seven Thorns premieres the lyric video for the song “Symphony of Shadows”, Melodic symphony of darkness, while the shadows scream!
The official schedule for the Septiflesh, Krisiun show has been revealed, and also after a show there will be a after-party!