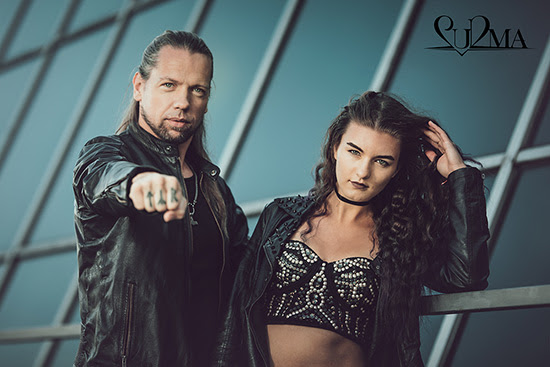 Metal Blade Records is proud to welcome Surma to its worldwide roster! Founded in 2018 by Viktorie Surmová (Bohemian Metal Rhapsody) and Heri Joensen (Týr), Surma is symphonic, progressive heavy metal at its finest. Fans can expect the debut album from this group to be released in 2020 via Metal Blade Records.

“We are overjoyed to announce that we have signed a contract with Metal Blade Records for three albums. We have been working on the music for a year now and we are very satisfied with the results. We take this great opportunity very seriously and we look forward to unleashing our music upon the world.”

Viktorie Surmová is a member of the theater ensemble of Divadlo Na Vinohradech in Prague, where she performs in a play called “Její Pastrokyňa”. She has also collaborated with the Czech band Rosa Nocturna, singing on two separate singles, plus the whole album Za Hradbami Času (2017). Additionally, Viktorie was a founding member, lead singer and songwriter in the Czech band Surmata, who recorded a few singles in 2016. Since 2018, Viktorie has been part of Bohemian Metal Rhapsody, a very unique Czech metal project. She has also appeared as a guest singer for bands such as Drunk With Pain (on 2016’s ”Hail The Monsters”), Victorius (on 2017’s ”Heart of the Phoenix”), Kilmara (on 2018’s ”Across the Realm of Time”), Cruadalach (on 2018’s ‘‘Raised by Wolves”), among many others.

Heri is a Faroese professional musician, educated at The Alternative Rhythmic Conservatory (D.A.R.K.) in Copenhagen in 2003. Starting in 2002, Heri has released 8 studio albums with Týr and one with his side project, Heljareyga. He was also featured on records by Ensiferum (2009’s From Afar), Wintersun (2012’s Time I, 2017’s The Forest Seasons) and Alestorm (2011’s Back Through Time).

For a preview of Viktorie and Heri’s new project, Surma, fans can check out the live video for the track “Like the River Flows” – featuring session members Kevin van den Heiligenberg (drums) and Jakub Janků (bass). Filmed at Barga Negra, Budapest and directed by Viktor Nagy & Péter Lerch of Mihaszna Film (facebook.com/mihasznafilm),

Check out the live performance of the song “Like the River Flows”, here: