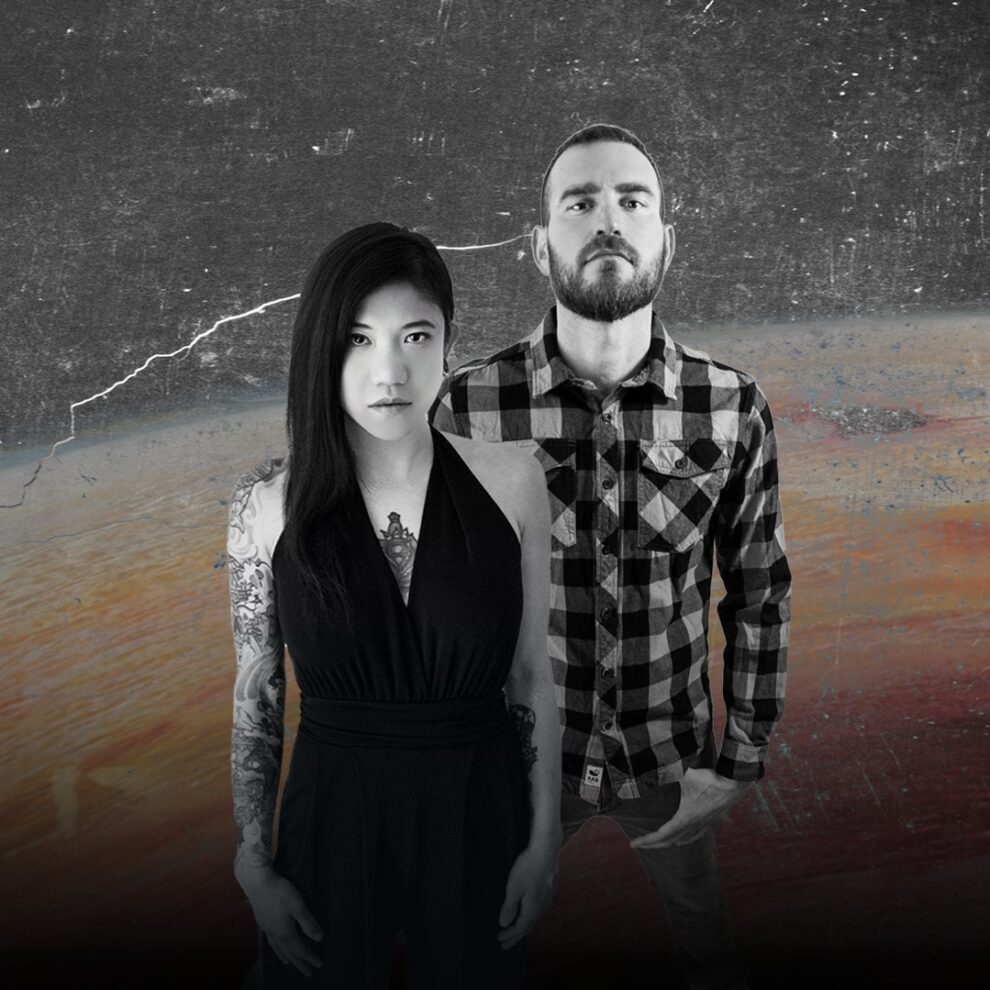 British avangrade/ progressive poetic metal/rock duo The Chronicles of Manimal and Samara premieres the official music video for the “At The World’s End”, taken from their new official debut upcoming record “Full Spectrum”, which will be released on February 26th.

As all of their songs – that where released recently. This one as well, has a strong message – but in this case also a symbolic one – that the listeners will like, for sure. It starts with some rock rhythmical sounds and Daphne’s usual narrative outstanding skills – that is a epic and intriguing start of the song. Then it continues with the low-grounded doom metal riffs by Andrea followed by the progressive metal influences and elements which they greatly combined with the whole song. The music and the influences perfectly presents the emotions of the atmosphere after doomsday – reflecting the story of the song in a outstanding way, that is why this song is incredible awesome in its core.

The band also recorded this song, because they where inspired by the statement of the IPBES about the animal species extinction , which is happing for  a quite a long time, for years now and this is a warning that we are – with each step and destruction very close to a end of the world. Be a change to stop that. The band sure did a great job presenting this message in their own way, don’t let the world end.

The story is about the world that is gone – our world that we knew before, to go back where it all begin – the presentation of what might happen to all of us, not about the real end or fatalism or doomsday, but to raise awareness about what will mankind do itself, if we not stop doing to Earth- what we are doing now. This story is also about two people that symbolically present hope, there are in love and they are saying goodbye to each other forever on the last day on Earth, but also presenting hope in their wishes, dreams in the new world, even if they are not going to be in this new world. Basically the main message of this story is to build awareness about yourself and everything around you.  There will be always hope – after all of the destruction and cataclysm – but for hope to be born, there must be a catastrophe before. Everything must die and be born again – natural balance that is needed so that life can existed in every form, also for the hope as well, to live in our minds – as a guide for a better tomorrow.

This great message was presented in such majestic way by the band, as a high art form, that presents the true philosophy of life, but the point is to stop that, before it’s to late. The duo for sure presented the main essence and point of  the message to the core, which makes this song a brilliant piece of art and brought out the awareness as best as they can.

Destruction and chaos can teach us empathy that will all lost, in a mean time. That is also the message of the song and of course love, as the universal answer and need, that pushes the world foreword in  a better tomorrow. The sounds and melodies are perfectly fused with the 3D images in the video of the end of the world, that follows the narration of Daphne in this great way. Images show the life after the end of the world and the duo presented it in such realistic way, without adding unnecessary details to the story, but showing it how it is, what will happen if we as mankind don’t change our ways. Each of the aspect presents the part of the puzzle, that needs to be put together, each element is crucial for the story – with many messages showing the main essence of the life itself not in a good way, but in a good way at the end of it all, which is the main point of it all, after  he raining, sunshine always comes.

The duo showed with their producing and video editing that they are incredible artists in many of their videos, but especially in this one – once again the true form of art was presented – that imitates life itself. They did an awesome job presetting the messages, music and the visual art of the song in a glorious way, showing the true masterpiece to the audience, that this video will leave speechless and the song will awake their consciousness , to have hope and be a better human beings.

Be aware of the destruction around you – before it is to late, through the sounds of rock/metal divinity and the highest form of art. Let the love and hope live, or let the world die.

The song, together with the other 10 tracks in their forthcoming debut album, ”Full Spectrum”, was recorded between February and June of 2020 when Daphne Ang (Singapore) and Andrea Papi (Italy) came together as The Chronicles of Manimal and Samara to compose and produce a full album at their home studio during the first London Lockdown. Already lauded to be “One of the Best Albums of 2021” by Turn Up the Volume!, the duo’s 67 minute-long debut album ”Full Spectrum” will include previously released singles as well as some new songs.

The Chronicles of Manimal and Samara (TCOMAS) are a London-based duo formed in late 2019 by Andrea Papi and Daphne Ang. Inspired by the musical innovations of Kraftwerk and Tool and the poetry of Sylvia Plath, Virginia Woolf, and Jim Morrison. TCOMAS continues to fill a gap in music by bringing together music and literature into a sonic space where poetry and the spoken word meets electronic and rock.

Check out the official premiere for the music video of the “At The World’s End” ,here:

Nightfall releases new music video for the “Giants of Anger”!
Vreid announces new record and movie ”Wild North West”, revealers the details for it, releases the teaser for it!