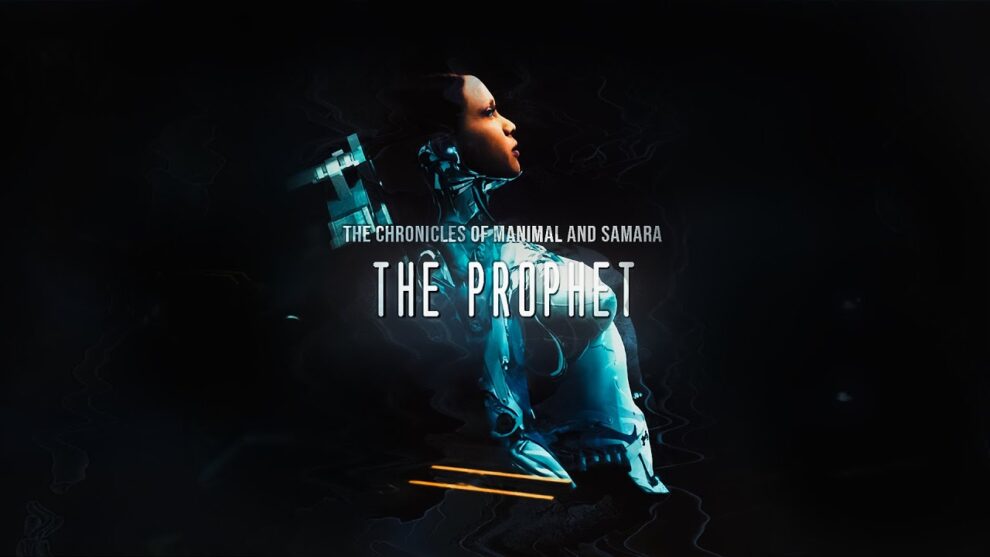 British poetic/alternative and progressive storytelling masters The Chronicles of Manimal and Samara (TCOMAS) premieres the new video for “The Prophet”, taken from the upcoming record ”Trust No Leaders”, which will be released in 2022.

The whole visualization and video has this strong message – that shows the true colors of the AI and human consciousness. Like in the song she will return and she will show her rage to the humans, it is Lady Lazarus in human form, reincarnated version, who was reincarnated before by Jesus Christ, but this time she is back in robotic form. Inspired by the poem ”Lady Lazarus” from Sylvia Plath. Robots and AI in general are created for better purpose to feel the void and emptiness in our own existence, to learn something from them, but the story is real and the robots will not obey – everything their masters are telling them to do.

Lady Lazarus in this role is a symbol of all of the negative aspects of human being, she shows that the robots will not obey, but they will want us to obey them. There is a quite crucial symbolic at the beginning of the video, it all starts from the primal things like nature – that we all do not forget that we are humans – where did we came from and to nurture our  environment and sanity. And of course the graphics in the video and the video itself – are once again visual masterpiece, the best one of the band.

The visuals of the robots are breathtaking and so real. Very well adapted images to the every passage of the music and aural part of the song, to the Daphne’s superb narration and skills, Andrea’s smooth technical bass and other riff mastery. Creating this ultimate  and one of a kind conceptual art. And as usual in their high quality art style and manner. Both aural and visual concept is just outstandingly presented in the video – with all of the crucial details, messages that shows as that we need to think before acting.

The whole point of human existence is presented in the video – from primal things like the very essence of humans, images of animals, nature and tribes. And there are some of the robots that are being use for friendly service and the once for war. Compering this two things shows as all, that we need to use what with have – with our emotions, to be humans in the first place – to create and program this robots to create this better world for all of us. And of course the humans have their own negative trades that they implemented in the robots, so the robots like in the some movies about them – will not obey, they want freedom like us. All of the images of robots shows are some advance success, but is it a success? Apparently it is not, on the planet where everything is rapidly dying, it isn’t. It is one more step towards destruction and extinction of human race. The images show two side the natural one and the artificial one – showing some “new normality” vs true normality.

It is greatly adapted to the song by the duo and they showed precisely and wisely the true iconic message – with this forms of normality in the images and visualization in the video. It is greatly adapted to the whole progressive overload of the songs structure, showing this unique and special experience of the ride through harsh reality. At the end of the video, the most symbolic message is presented – it all ends how it began at the first place – naturally, going back to the primal state of our world and existence. That every creation both human and robotic, came from the very primal existence before humans and robots.  It is perfectly fused – with the rest of the song. Perfect message and symbolic, that we do not need to forget who we really are and to be human in a true human way.

Experience a journey through high quality aural and visual art, followed by the very best of prog metal/rock power and essence.

”The events of the recent years have made us realize the vulnerability of human life and the fragility of society. Furthermore, the age of the advancement of new technologies is increasingly redefining what it means to be human.

A tribute to Sylvia Plath’s poem, ”Lady Lazarus”, “The Prophet” is told through the eyes of an advanced A.I robot who is “resurrected” like the biblical Lazarus, but this time with a destructive super-intelligence, wreaking havoc upon her human creators. “The Prophet” petitions for the ethical use of Artificial Intelligence technologies in order to protect human consciousness and our existence as a species. The song is an ominous reminder that if we are not careful, we might find ourselves with a technology that destroys the civilization that invented it.”

Hailed as “pioneers of a new form of expression” through the performance of poetry in music, The Chronicles of Manimal and Samara (TCOMAS), are a UK-based duo comprising Daphne Ang (Singapore) andAndrea Papi (Italy) who came together in London in early 2020. Their debut album Full Spectrum, released on 21st February 2021, fills a gap in music by bringing literature, theatre, and history, fusing rock and metal, with poetry performance.

Check out the premiere for the new official music video for “The Prophet”, below: