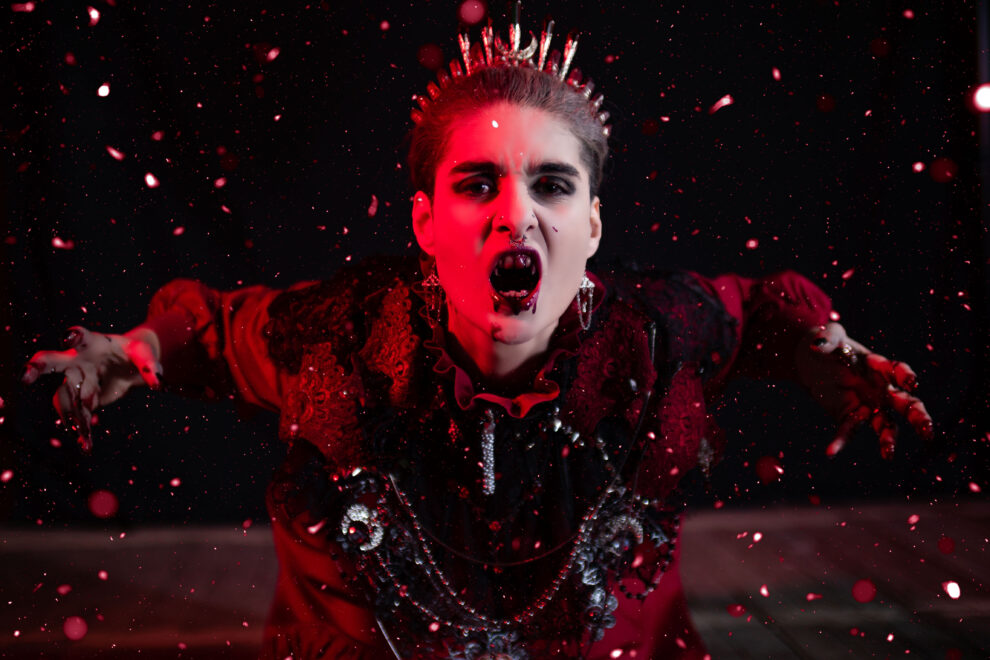 The Inferno Doll‘s Gothic horror creation “Renfield” has been unleashed in spectacular way to the world – followed by gothic divinity of artist herself. Exploring a deadly tale of a vampire and a hunter, who is played by Ember Belladona, her theatrics deliver a bloodthirsty offering – that surely gives Dracula a new meaning and artistic form.

Laura states this about her music video and song:

“Of all characters in Dracula, Renfield (in my opinion) is the most underrated and one of my favorites. ”Renfield” lost his mind for serving Dracula’s evil plans. He was a man who in moments of clarity felt guilt for being the one who prepared the way for Dracula to turn Mina into a Vampire. Dracula promised ”Renfield” immortality and he was constantly providing him with insects so he could consume their lives… but in the end, he’s betrayed by his Master.”

The Inferno Doll ventures deeper into the realms of the dark through the new single “Renfield”. Exploring a love of Gothic Horror, ”Renfield”, a seemingly underated character in Bram Stoker’s ”Dracula” is brought into the limelight in this heavy demonic release.

Further inspiration for the song also comes from ”Renfield – Slave of Dracula” by Barbara Hambly – in which unanswered questions are met with intriguing explanations about his turmoil of being torn between good and evil. Featuring Ember Belladona on the glissando flute, the musicality of this song deviates from THE INFERNO DOLL‘s previous releases. Heavily distorted guitars and thrashing percussion explode into a high intensity full sound. The elegant flute weaves its way through the metal instrumentation adding a haunting edge and a glimmer of hope for choosing the path into the light. Laura’s demonic harsh vocals manifest the monstrous nature in “Renfield”, while ethereal clean vocals emerge to enhance the textural variety of the song through a compelling contrast.

The Inferno Doll descends into the disturbing nightmarish realms, unleashing a ferocious metal assault to deliver a narrative on one of Gothic literature’s most chaotic and mysterious characters. Battling an internal conflict, the darkness ultimately consumes. Check out the music video for ”Renfield”, below: