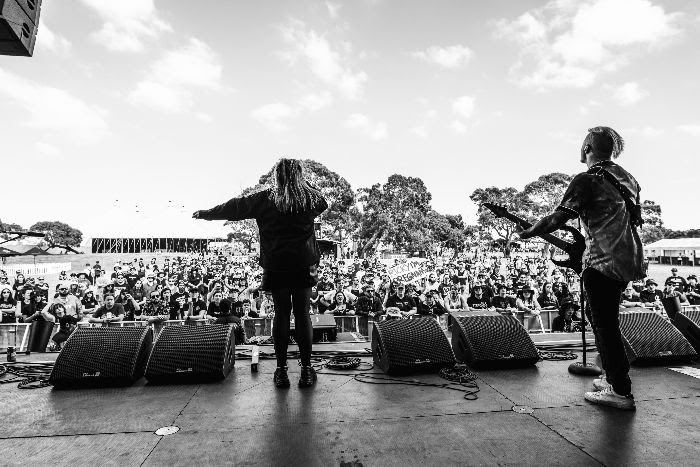 The Last Martyr have been making waves the last twelve months with their distinct brand of heavy rock that has seen them hit a multitude of milestones including Triple J Unearthed Feature Artist and a place on the Unify Forever bill this past March.

Their EP ”Purgatory” dropped in December and as the band gear up to take the tracks on the road in support of Drown This City this April/May, they’re releasing the final installment in the form of a live music video for “Out Of Time.” The video, shot by Beth Morrison of Act Four Photography, features live performance and backstage shots from Unify.

The track itself is deceptively upbeat and confronts the fear that time is moving too fast to keep up with. Vocalist Monica Strut said the track is particularly significant to her.

Front-women and Vocalist Monica Strut states this about the new music video/song:

“‘Out Of Time’ was one of the hardest and more emotional tracks on the EP to write.  I’ve always felt this time pressure to be successful by a certain age, especially as a woman.  I felt like the pandemic had robbed me of two years building my music career and there was absolutely nothing I could do about it.

I always try to include a glimmer of hope in my lyrics, even if they’re about something darker but this is the first song where I didn’t do that. I chose just to be vulnerable and confront my fears head on. After recording it between one of the lockdowns here, I got home and just bawled my eyes out. But overall it’s one of the track that people have seemed to resonate most with from the EP.  I hope it helps people feel seen.”

Catch The Last Martyr at upcoming dates with Drown This City and Earthcaller in Adelaide and Melbourne. And also supporting hard rock heavyweights, Black Veil Brides, at their two Melbourne shows at the Croxton on  May 7th before heading back into the studio to record new music coming later this year.

Check out the music video for “Out Of Time”, below:

Jelena Taylor released new song as a tribute to “Alien” movie and Ellen Ripley for “Perfect Survivor” feat. Andrew Oosterbaan and Craig Spencer!
Eviscerate The Crown premieres the music video for “Betrayer//Deceiver”, embrace the dark side, through the sounds of death metal/deathcore brutality!