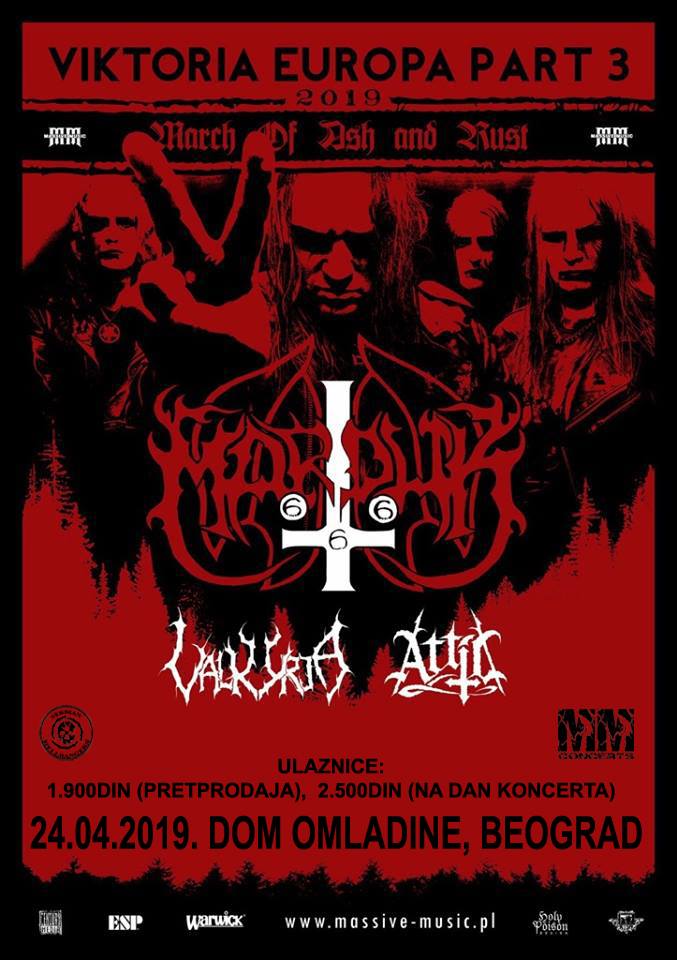 Marduk and Valkyrja will perform in Serbia for the second time in Serbia/Belgrade at Dom Omladine in the organization of the MM Concerts and Serbian Hellbangers on April 24th as a part of their ”Victoria Europa part 3” tour, promoting their latest release ‘‘Victoria” released via Century Media Records!

Attic will perform as a support act on the show. This band inspired by classical traditional heavy metal influences from Mercyful Fate, Judas Priest, King Diamond. Serbian fans will for sure witness some classical heavy metal show from this guys withValkyrja and Marduk in Belgrade at Dom Omladine on April 24th.

The band started their journey in 2010, and so far they released two studio albums, and one of them is called”Sanctimonious”, which is their latest release, that was released for Ván Records in 2017.

Statement of the organization Serbian Hellbangers and MM Concerts about the band and the show in Belgrade:

The tickets were released for sale on December 24th at a price of 1600 dinars (the first 50 tickets) and 1900 dinars in pre-sale. On the day of the concert, the tickets will cost 2500 dinars, and the venues are Eventim and Gigstix.

For more exclusive details for the show go HERE.

Check out the official lyric video for the song “Sanctimonious” here, enjoy it:

Check out the live performance of the Valkyrja in Paris 2018 here, enjoy it:

Check out the full stream of the newest release called “Viktoria” here, enjoy it: