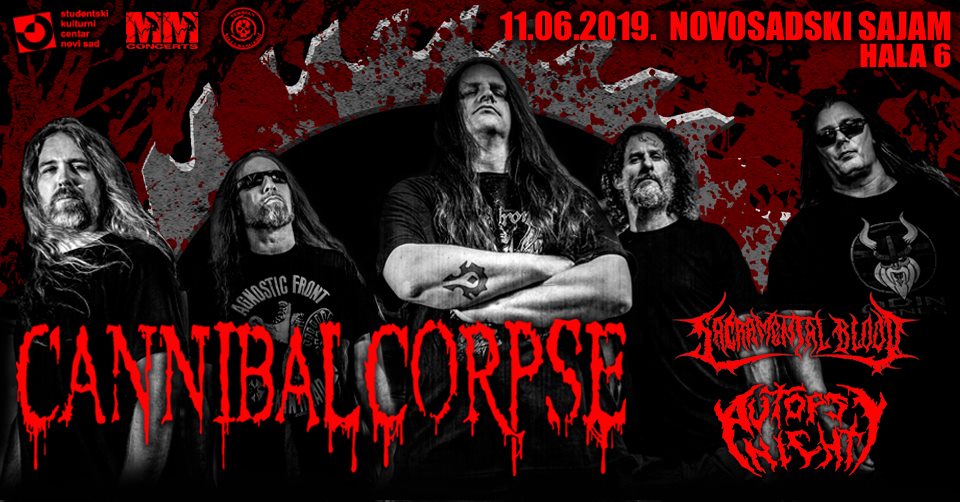 Gods of death metal Cannibal Corpse will perform on Jun 11th at Novi Sad in Hall 6 Novosadskog sajma , and they will once again gave their fans a spectacular show like they did in Belgrade, four years ago. They will promote their latest album called “Red Before Black”, via Metal Blade Records, this records was also produced by Morbid Angel/Hate Eternal Eric Rutan, and he is the replacement for their Guitarist Pat O’Brien.

Statement of the organization for the show Serbian Hellbangers and MM Concerts about the show:

Serbian Death metal band Sacramental Blood and Russian brutal death metal band Autopsy Night will be a support acts for the Cannibal Corpse show at Novi Sad on Jun 11th at hall called Novosadski sajam  and it’s number is 6 in the organization of the MM Concerts and Serbian Hellbangers!

Autopsy Night is the brutal death metal band from Russia, that has been formed in 1996. The band released several demos and EP’s, but also three official studio albums, the last of which was released in 2018 ” Anatomical Integrity Dissolution”. This year he will perform at the MetalDays Festival in Slovenia.

In 2006 Walk Records released debut material of Sacramental Blood, on split CD with Ophiolatry (Brazil). The title “Inception of Ceremony” symbolically referred to it’s ordinary number in band’s discography. Band promoted cd on European Blastour 2006 with Ophiolatry (taking part at Mountains of Death and Exit festivals), mini tours with Cripple Bastards and Dakon and numerous shows with Behemoth, Sinister and many other local bands.

In beginning of 2009 band started slowly tracking down the full length album, making short break for ”Storming the Balkans” 2009 tour with God Dethroned and Fleshgod Apocalypse. Recording sessions were completed after the tour but dissatisfaction with mix and some disagreements between band members put the band on hiatus after the show with Deicide.

After search for fresh blood, the new line up got together in 2011. To test new members, band recorded the 2nd demo and following the concept of naming after ordinary number of release, the material was entitled “The Second Death”. To promote the new demo and new line up, Sacramental Blood went on 2 weeks long ”Disgorging the Balkans tour” 2011, with Mexican Disgorge and Natron. “The Second Death” was released later in 2013 by Darzamadicus records as “Triple Death Threat” split cd with Heretical Guilt and Blasphererion.

During “Disgorging the Balkans” tour the chemistry between band members was great and band decided it was time to dig up and finish the debut album. New vocalist/guitarist re-recorded some old tracks and gave new sound to Sacramental Blood. The band hired Stefano Morabito (Fleshgod Apocalypse, Hour of Penance, Beheaded, Eyeconoclast…), who reamped, mixed and mastered album in The 16th Cellar studio (Rome). The result is 3rd material called “Ternion Demonarchy”.

Check out more details about the show at Facebook event HERE.

Check out the official lyric video for song called “Sanctimonious” from Sacramental Blood here, enjoy it:

Check out the music video of the Autopsy for the song called “Депривация человечности” here, enjoy it:

Check out the stream of  the Cannibal Corpse live performance at Santa, Ana, here:

Check out the full stream of their latest release  “Red Before Black” here, enjoy it: