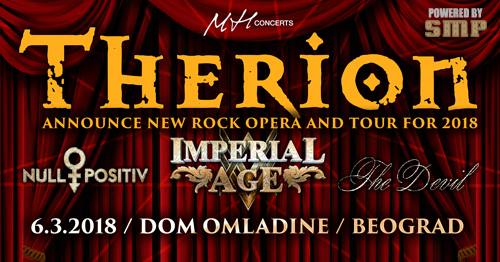 Swedish gothic symphonic metal masters/monsters Therion will held a concert in Belgrade at Dom Omladine on March 6th, and they will promote a new album ”Beloved Antichrist”, which will be in the form of a metal opera that has a magic and unique soul to it. 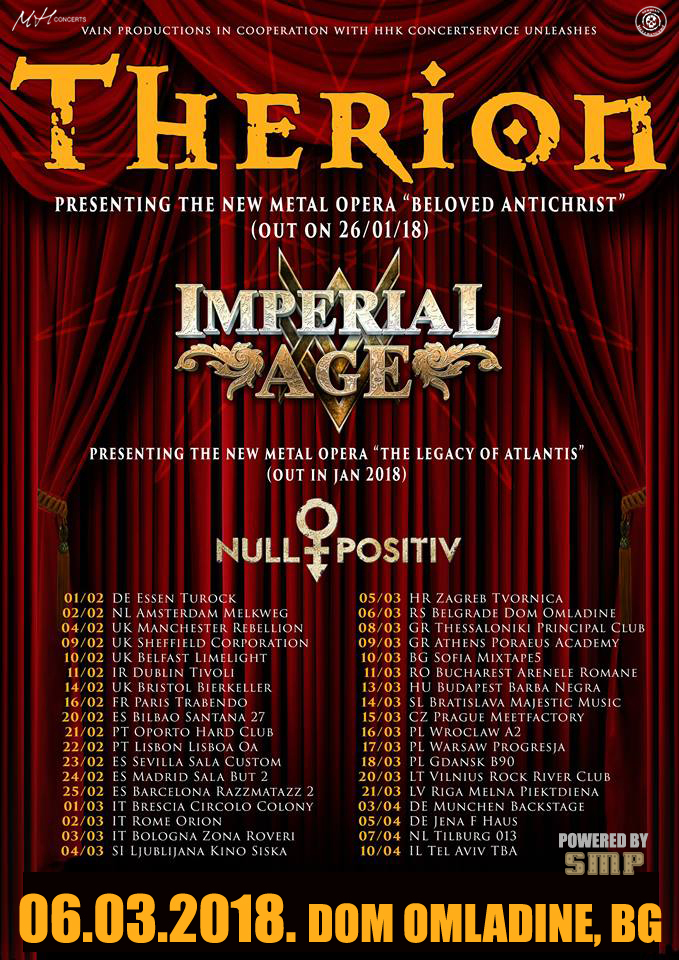 The support acts for their show will be the Russian symphonic gothic metal band Imperial Age from Russia and German alternative rock/metal band Null Positiv and British doom metal band The Devil are confirmed by the organizers of the concert agencies MH Concert and Serbian Hellbangers.

Statement of the band about the new album and the story/concept behind it:

“We know that metal works are no longer an unusual thing, but the term from the beginning of next year will get a whole new meaning because there will be 29 different roles and vocals on ours, and we will try and present it all live. We are currently working on this project. The concept is inspired by the “A Short Tale of the Antichrist”, written in 1900 by Russian philosopher and writer Vladimir Solovjov – quoted from the band.

Tickets were on sale on August 28th at a price of 2,200 dinars (the first 100 tickets). The tickets will cost 2,800 dinars in the official pre-sale and at the concert day 3,200 dinars. Sales locations include Felix bars in Belgrade and Mungos in Novi Sad as well as the Eventim network.

Therion was formed in Upplands Väsby (a suburb to Stockholm, Sweden) in 1987 by Christofer Johnsson, under the name ”Blitzkrieg”. Chris was at that time playing the bass and did the vocals. The line-up consisted besides him of Peter Hansson on guitar and Oskar Forss on drums.

Founded in 2012 by singers/keyboardists Alexander “Aor” Osipov and Jane “Corn” Odintsova, today Imperial Age are the best-known disciples of symphonic metal not only from their Russian motherland, but from the whole of Eastern Europe. Delivering a mixture of heavy metal, male and female opera and rock vocals, orchestral and choral sound with a strength unparalleled even by the mastodonts of the genre, the band gained international recognition after Christofer Johnsson, the godfather of symphonic metal and leader of Therion, noticed the Russian talents, signed them to his own label Adulruna and took on an immense European tour in 2016. 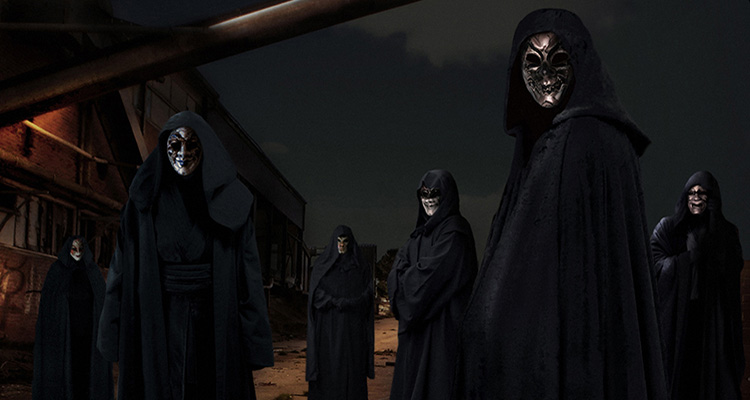 A mysterious band performing under masks and whose identity is unknown for a number of years, and is characterized by its music as an atmospheric and ambient metal. They do not have songs but go through music (mostly) by the narratives of famous people such as Mahatma Gani, Dvajt Ajzenhauer or Martin Luther King. The debut album, the same name, was released by Candlelight Records in 2012.

Check out the official music video ”Theme Of Antichrist” until the show here, enjoy it:

Until their show, check out and watch new lyric video ”The Legacy of Atlantis” here, enjoy it:

Check out the music video for the ”Koma” here, until their show, here:

Check out their performance on Winter Metal Days Festival 2017 performing ”Devil and Mankind” until their show in Belgrade here, enjoy it:

Check out more info on the facebook event HERE.