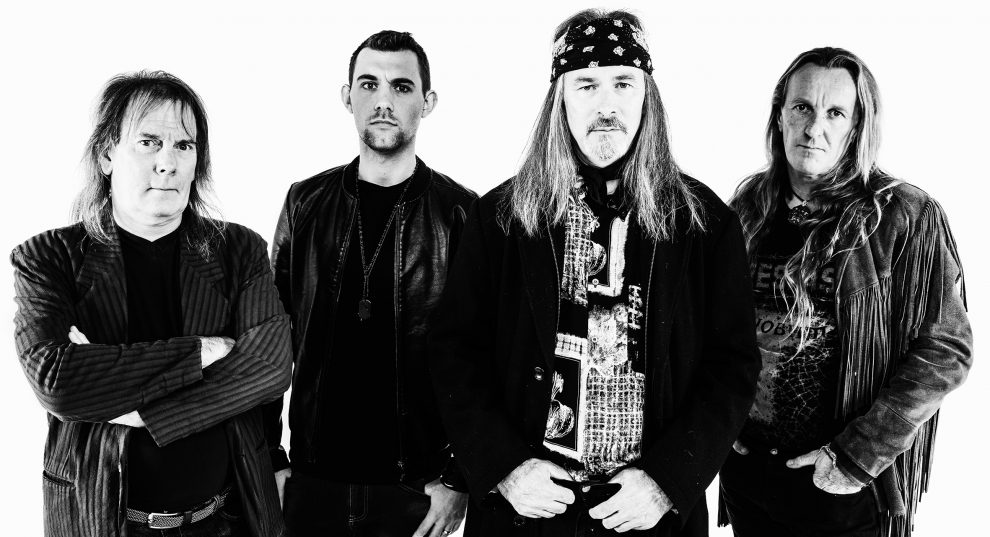 British Heavy metal giants Trespass premieres the music video for the “Be Brave”, taken from their latest album “Footprints In The Rock” released in 2018, via Mighty Music Records.

This is a classical rock/heavy metal song, with chilling vibes, balanced technical performance, and the best part is the drum set, so balanced, with such a coordinated technical approach, that makes song great and interesting for listening. There are also great solo parts of the balanced in such skillful way, totally diving into the song, and the whole atmosphere of that classical rock vibe. Vocals of Mark Sutcliffe are unique, added that chilling vibe to the song, and with this the song is complete, and all of this things tell the story, a brave one, to dive into. Be Brave, trough the sounds of rock n’ roll, and forever be rebellions, and unstoppable in classic rock manner.

Vocalist/Guitarist Mark Sutcliffe states this about the new music video/song:
“The song “Be Brave” is from the Trespass album “Footprints in the Rock” on the Mighty Music label. It is a song about facing your fears. And sometimes all we have to fear is fear itself! Sometimes you have to make a stand! The video is based loosely on the tale of red riding hood and was produced by Aura Films and Trespass.”

Trespass was formed in Sudbury, Suffolk, England in April 1979 by brothers Mark (guitar, vocals) and Paul Sutcliffe (drums) Dave Crawte (guitar) Richard Penny (bass). Around this time they started gigging around East Anglia, playing a mix of rock covers and original songs including early versions of One Of These Days and Lightsmith.

The band were spotted by Trial records, a new local independent record label and were offered an opportunity to release a song. Trespass recorded a self financed session at Hillside Studios Ipswich in October 1979. This featured One Of These Days and Bloody Moon which were destined to be the bands first single on the Trial label.

One of these days the song was released in January 1980 and gained airplay on Radio One’s Friday Night Rock Show hosted by Tommy Vance and was also played by legendary DJ John Peel. One of these days became a firm favorite with the crowd at the Sound house rock disco hosted by Neil Kay in London and featured regularly in their metal charts featured in Sounds magazine. Richard Penny, despite all he had contributed it was decided, was not right for the long term and he was replaced on bass guitar by Cris Linscott.

The band recorded a session at Spaceward studios in Cambridge which was also used by Iron Maiden for their Sound house Tapes. A new version of One Of These Days, a new track called Stormchild, Lightsmith and a potential new song ”Live It Up”! were recorded. These versions of One Of These Days and Stormchild were to ‘headline’ the EMI compilation Metal for Muthas volume II. All other bands on the album were represented by one track.

Iron Maiden had similarly had two tracks featured on Metal for Muthas volume I. During this period Lars Ulrich and James Hetfeild of the fledgling Metallica joined the Trespass fan club.

Many UK shows followed including at the prestigious Marquee club in Wardour street London.

A radio one session for The Friday Night rock-show was recorded. A track from which Visionary, with an excellent lyric written by bass guitarist Cris Linscott, was featured on the BBC compilation album ”Metal explosion” which also featured bands such as Samson and Gillan.

Trespass recorded a demo session at EMI which it was expected to lead to a major deal.
A second single Live it up was delayed by the departure of singer Steve Mills and the recruitment of Robert Eckland also due to major label interest in the song.

In  1981 the band recorded their third single the Bright Lights EP . Bob Irving left the band during recording.
Following the tragic early death of Mark and Paul’s father Allan Sutcliffe, Trespass  finally split in 1982.
Despite their fairly short lived time on the metal scene Trespass made a lasting impact. Lars Ulrich and James Hetfeild of Metallica remained fans and One Of These Days was featured on NWOBHM compilation 79 revisited put together by Ulrich and Geoff Barton  in 1990.

The band released their highly acclaimed greatest hits album the works in 1992. This was also released in Japan through Pony Canyon Records. Trespass released a critically acclaimed  studio album ‘Head’ in 1993 showing a marked change in sound and style.

In 1999 Trespass held a live concert in Tokyo/Japan, was released through Pony Canyon as Metal Crusade along with NWOBHM bands Samson, Tank and Preying Mantis.

A further  major worldwide release was ”One Of These Days the Anthology” released in 2004 through Castle/ Sanctuary Records.

A new album by Trespass was recorded in 2012, featuring brand new versions of the bands early tracks, recorded to a high standard with a consistent sound and feel. The band have currently reformed with Mark Sutcliffe  at the heart of things and a new line up. Trespass have played live shows at festivals in the UK and Europe in 2015/16/17.

Transport League premieres the music video for the “Dawn of Lucifer”, hellish rock/metal song that burns the brains out!
Mayhem announces new album, and reveals details for it!