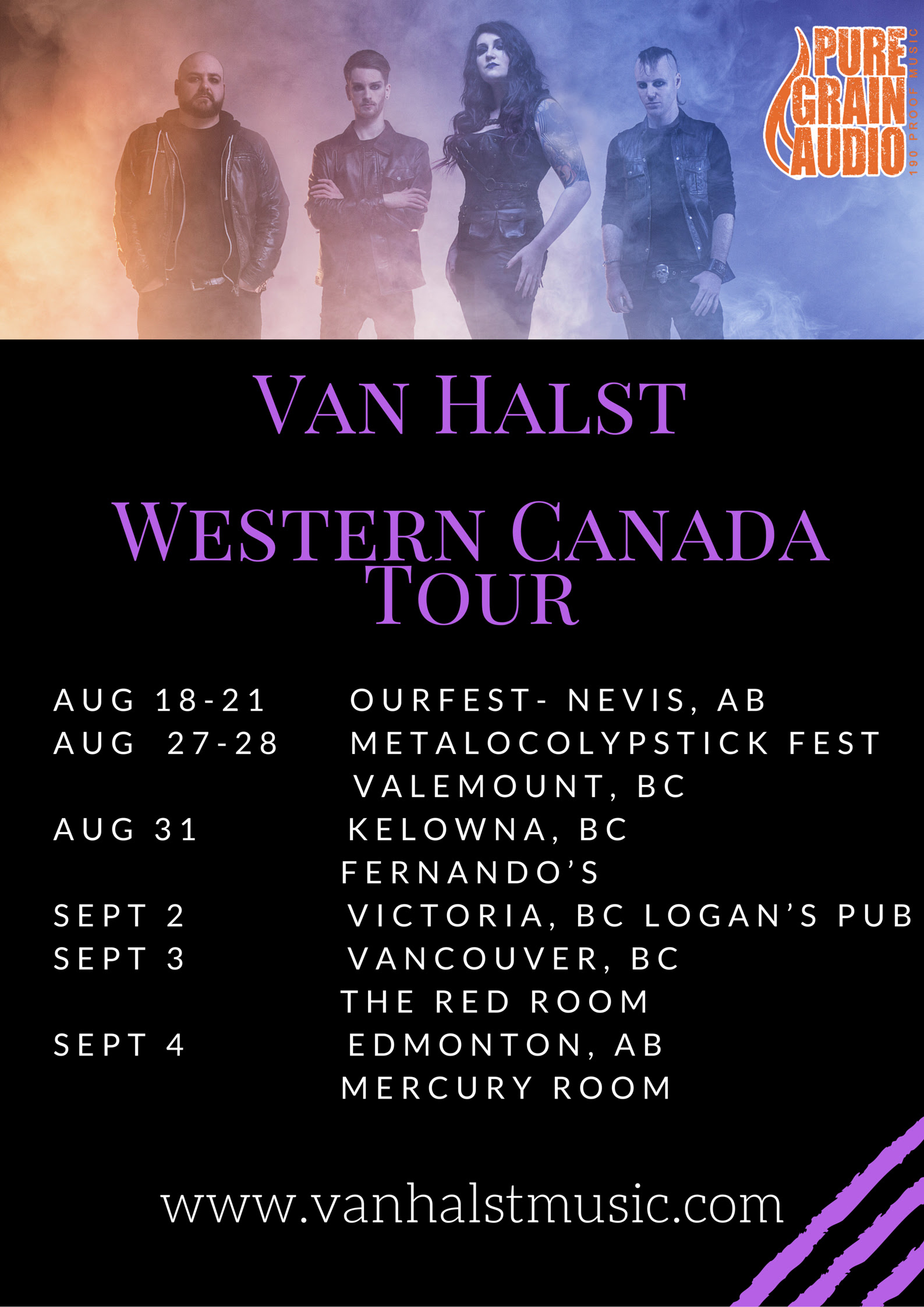 Music Video – Save Me – Watch here.

Canadian goth rock / metal band VAN HALST announce they will be performing on this year’s Metalocalypstick Festival in Valemount, BC on August 27th. The two day non for profit festival was formed to support women in metal, punk, hardcore and heavy bands! All bands on the fest line up feature one or more FEMALE member that are all Canadian and all power with special out of country guests Brazil’s NERVOSA headlining. 2% of proceeds from the festival will be donated to Girls Rock Camp and Vancouver Rape Relief and Women’s Shelter. Full details and line up can be found at http://www.metalocalypstickfest.rocks.

“We are very excited to be performing at Metalocolypstick Fest. There is such a limited presence of women in rock and metal so we’re really looking forward to meeting all the other bands over the weekend. This is an important festival being that the majority of festivals we perform at are male dominated, usually we’re the only female led band on the bill. We’re looking forward to watching the other bands and encourage people to come out to beautiful BC to take part in the festival.” comments vocalist Kami Van Halst of Van Halst.

Metalocalypstick Festival will be one of VAN HALST‘s stops during their Western Canadian tour presented byPureGrainAudio.com. The tour will kick off at OurFest in Nevis, AB on August 20th and wrap up with a hometown show in Edmonton, AB on September 4th.

Aug 20 – Nevis, AB  – Ourfest – info
Aug 27 – Valemount, BC – Metalocolypstick Fest – info
Aug 31 – Kelowna, BC – Fernando’s Pub
Sept 2 – Victoria, BC – Logan’s Pub
Sept 3 – Vancouver, BC – Red Room
Sept 4 – Edmonton, BC – Mercury Room
About:
A fierce, empowering force of hard rock fused with metal with strong socially conscious lyrics and advocacy for female rights, VAN HALST recently released their debut album ‘World of Make Believe’ on March 4th, 2016, which is now available on iTunes and Bandcamp.
VAN HALST, a project that first began as a solo endeavour for whom the band is named after — Kami Van Halst, has since become a full group producing socially conscious, lyrical tracks that focus on disenfranchised and marginalized populations. The band’s influences stay true to goth rock with Kami Van Halst demonstrating an agile vocal delivery in combination with pummeling growls. Lyrically, the band draws from black metal due to its focus on people suffering from isolation and rising to overcome the preconceptions of a judgmental society. In This Moment’s industrial fusion remains a primary influence for Van Halst, employing a sampler, synthesizer, and distorted vocals.
Kami Van Halst dominates as the vocalist performing both growls and soaring vocals (Surviving Suzanne), Scott Greene (Derina Harvey Band/Dirty Pool) and Strathon J. Bajowsky (Havok Way) craft the guitar work while Brendan McMillan (bass) (My Darkest Days) and Brett Seaton (drums) (Cultured by Fire) drive the rhythm section of the band. Kami’s range and virtuosic vocal ability always captivates an audience and her attitude on stage truly delivers the meaning behind the songs. The main writing forces for the band are Kami and Scott working together to give listeners a vivid image of social injustices. The band’s live performance is a theatric experience as the utilize full-costumes, make-up and stage props.