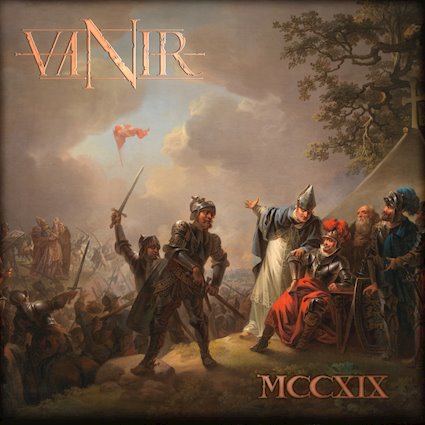 Crushing song of pure devastation, the band did a great job with this one. It has that fast tempo and riffs, bone crushing vocals, and godless solos in some part of the song. ”MCCXIX” is a song about the battle of Lyndanisse, when the Crusades were happening in that time, about the victory of Danish army in the war. Of course, the songs completely presents that war spirit, and with the technical parts of the song, it showed the full aspect of the story trough music and it’s spirit. War spirit never days, there is always another day to fight, viking metal conquers all.

”What defines a country’s legacy? What defines a nations understanding of itself?
This year on the 15 of June, it its – according to the legend -, 800 years since the Danish flag fell from the sky under the battle of Lyndanisse. Legend has it that de army under Valdemar the victorious was close to defeat, when a red flag with a white cross suddenly appeared on the sky as sent from heaven. As the army and the bishop praised the flag, the battle turned and the Danish army won the battle.  That flag that is now the oldest national flag to this day.

We Danes love our flag; it has been a symbol of our unity. But the story of how we got it is a legend, a fairytale of course. And how we chose to use it is up to us! What lies behind the story is a ambitious king, who used the sword of Christianity to start a crusade to the east. A bloody crusade to undermine and suppress a foreign nation. With this song we want to tell the story from both angles to show the duality that lies within our own self-understanding as a nation. And to show that it we have a responsibility to define how we interpret history and how we use it to justify the present.”

The song comes in two versions. One singed in English and one in native language Danish.

Check out the lyric video for the “MCCXIX”, here: