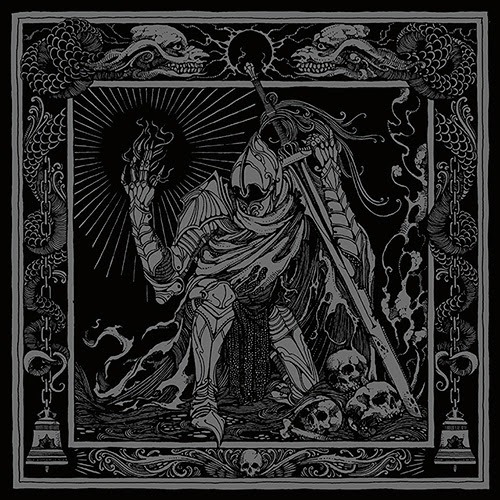 2018 was the breakthrough year for American Heavy Metallers Visigoth, and 2019 is looking just as bright for the Salt Lake City powerforce!

On May 24th, Visigoth will release a 7″ called ”Bells of Awakening” with two brand new songs: ”Fireseeker” and ”Abysswalker”.

”Fireseeker” is now available on all digital outlets and can be heard at: metalblade.com/visigoth – where the 7″ can be pre-ordered in the following formats:

“We are emerging from the abyss with a new two-song 7″ that we are looking forward to unleashing onstage across Europe this summer! Of course this is just a foreshadowing of bigger things to come, but we hope that the hordes will be placated – if temporarily – by this humble offering. We’ll leave it up to the listener to explore the unifying theme that ties the lyrics and artwork together, but rest assured that musically not much has changed. Love it or hate it, this is still straightfoward heavy metal done the way we’ve always done it. Without further ado, the road calls once again, and we answer with fervent hunger!”

Make sure to catch Visigoth on their full European run through Europe in May and June!

Make sure to check out music and videos from the bands latest album ”Conqueror’s Oath” at:metalblade.com/visigoth

Standing in staunch opposition to any presumptuous notion of “reinventing the wheel” or “redefining the genre”, Visigoth instead dedicates themselves to worshiping at the ageless altars of heavy metal with a singular focus on writing music inspired by their favorite records. Whether whipped into a frenzy ignited by classic USPM or NWOBHM anthems or pensively meditating on traditional epic heavy metal or weighty doom-inspired moments, these Salt City Hessian’s wear their influences proudly on their sleeves.

With their new 2018 long-player ”Conqueror’s Oath”,  Visigoth stays true to the title and conquers the sophomore slump blues with 8 iron-forged anthems of pure metal magic guaranteed to satiate the hunger of the rock’n’roll hordes! Returning to the depths of the Boar’s Nest in their hometown of Salt Lake City to record once again with engineer extraordinaire Andy Patterson (Subrosa, Deathblow,Dreadnought, et al), ”Conqueror’s Oath” was hammer-forged in a whirlwind month of mayhem and mastered by Dave Otero of Flatline Audio (Satan’s Host, Nightbringer, Khemmis, et al).

Immortalized by breathtaking cover art created by none other than underground album art legend Kris Verwimp (whose work has graced records  by Absu, Bewitched, Desaster, Horna,Moonsorrow, Skullview, Arkona, and many, many more) in proper swords-and-sorcery fashion,”Conqueror’s Oath” stands tall on the field of battle, serving as a gauntleted fist in the face of non-believers.

Prepare for the onslaught of Salt City Steel!