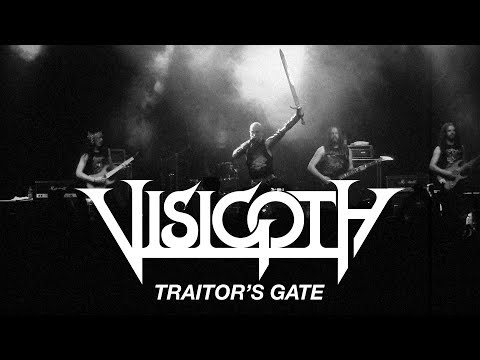 2018 was the breakthrough year for American Heavy Metallers Visigoth and 2019 is looking just as bright for the Salt Lake City powerforce!

There will be a few exciting announcements coming shortly from the band’s camp, but first of all Visigoth would like to thank their loyal and constantly growing fan-base with a music video for ”Traitor’s Gate”, one of the key songs of their latest album ”Conqueror’s Oath”. The video features live footage from Visigoth’s festival shows at Hell Over Hammaburg, Keep It True and Bang Your Head and was edited by Oliver Bomber Barth for ”Visions in Fear”.

Make sure to check out music and videos from ”Conqueror’s Oath” at: metalblade.com/visigoth

Standing in staunch opposition to any presumptuous notion of “reinventing the wheel” or “redefining the genre”, Visigoth instead dedicates themselves to worshiping at the ageless altars of heavy metal with a singular focus on writing music inspired by their favorite records. Whether whipped into a frenzy ignited by classic USPM or NWOBHM anthems or pensively meditating on traditional epic heavy metal or weighty doom-inspired moments, these Salt City Hessian’s wear their influences proudly on their sleeves.

With their new 2018 long-player ”Conqueror’s Oath”,  Visigoth stays true to the title and conquers the sophomore slump blues with 8 iron-forged anthems of pure metal magic guaranteed to satiate the hunger of the rock’n’roll hordes! Returning to the depths of the Boar’s Nest in their hometown of Salt Lake City to record once again with engineer extraordinaire Andy Patterson (Subrosa, Deathblow,Dreadnought, et al), ”Conqueror’s Oath” was hammer-forged in a whirlwind month of mayhem and mastered by Dave Otero of Flatline Audio (Satan’s Host, Nightbringer, Khemmis, et al).

Immortalized by breathtaking cover art created by none other than underground album art legend Kris Verwimp (whose work has graced records  by Absu, Bewitched, Desaster, Horna,Moonsorrow, Skullview, Arkona, and many, many more) in proper swords-and-sorcery fashion,”Conqueror’s Oath” stands tall on the field of battle, serving as a gauntleted fist in the face of non-believers.

Prepare for the onslaught of Salt City Steel!

Check out the live music video for the song called “Traitor’s Gate” here, enjoy it: