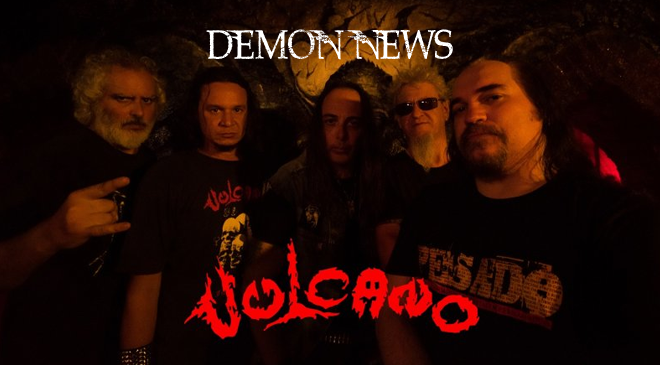 VULCANO: Check out some testimonials about the 30 years of the classic “Bloody Vengeance”

Considered one of the greatest classics of the extreme metal on the world the “Bloody Vengeance” complete this April 30 years since its launch. This album has influenced generations and took the Brazilian Metal Underground to a new level, across borders and conquering the Worldwide Underground.

During the months from January to March the Sangue Frio Produções collected testimonials from some people about this classic and you can check out now:

“It’s a classic, influencer and as current as in 1986, when it was released. All Hail Vulcano! ”- Mark Garcia (Metal Samsara)

“In 1986 to reach a point of metal in São Paulo called Woodstock Discos the Valcir Chalas owner showed the LP that would revolutionize the head of all the bangers of the time he had shown the latest release of Santos band Vulcano Bloody Vengeance, look I have ever had heard Vulcano a tape that a friend asked to write to the rock gallery in 1982 was a double compact, but to hear Bloody Vengeance I was sure that the Brazilian metal did not lose anything to the foreigners, ‘we were ready’ ” . – SrWins (Radio Exmera)

“The ‘Bloody Vegenace’ album is of seminal importance, not only for the Brazilian metal scene, as well as the world Metal, especially the extreme. The disc is one of the pioneers to join the main essences of extreme metal and they Thrash, Death and Black Metal, proving that the styles are complementary. Not only the drive but the Vulcano itself is worth the Heavy Metal. simply unmatched. ” – Vitor Franceschini (Journalist Blog Art Metal – MTB 0076431 / SP)

“I remember when I interviewed Wagner ‘Antichrist’ Lamounier (former Sarcófago) and he replied that the pioneering bands, the only one he really cared and followed was the Vulcano. Alex Camargo from Krisiun, is also a great enthusiast of the ‘Bloody Vengeance’, one of his favorite records. Well, I closely followed the band in the mid-80s, attended the shows and could shoot an important group show in Santos (São Paulo), next to the Dorsal Atlântica, Krânio Metálico and Massacre (Chile). Indeed, the band had a position ahead of his time as dealing with their music in a different way. It was fast, aggressive, had visual, worried about the scenic posture on stage and knew open spaces in the underground. Fortunately, the tour of ‘Bloody Vengeance’ was crowned with the opening for Venom in the gym of the Corinthians in São Paulo in December 1986. Of course, I was there! ”- Ricardo Batalha (Roadie Crew)

Listen to the album “Bloody Vengeance”: