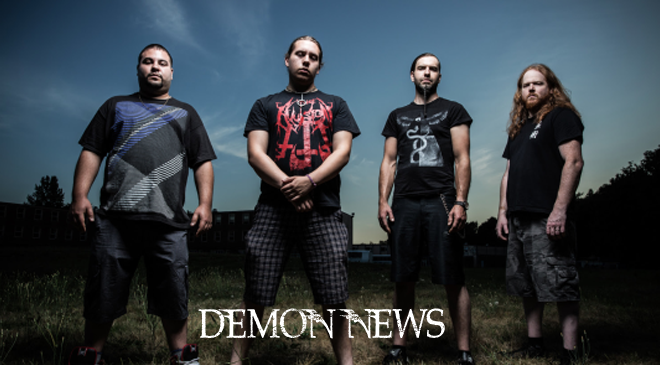 Wrapping up their cross Canada tour last week in support of their new EP ‘Mouichido’, Vancouver, BC’sWITHOUT MERCY are gearing up for their next big performance at this year’s Loud As Hell Fest in Drumheller, AB on July 31st (set time 7:30pm). This year’s line up includes Unleash The Archers, Striker, Into Eternity, Ninjaspy, Divinity, West of Hell, Disciples of Power and more!

In additional news, the band teamed up with SkullsnBones.com for their next guitar playthrough for their track ‘In Waves’ that features vocals from Mark Hunter of Chimaira.

“Crazy things happen when your buddy runs a butcher shop and has an open mind.  We shot this video as a playthrough ,but with a different spin on the concept. There was so much blood and flesh, I almost went vegan. Almost.” comments guitarist DJ Temple.

To watch the video, please visit the following link: http://skullsnbones.com/without-mercy-exclusive-premiere-of-guitar-playthrough-for-in-waves/

The band’s new EP ‘Mouichido’ is a rebirth for the band as it’s a re-release of re-recorded material from their 2014 EP ‘Reborn’. ‘Mouichido’ is the Japanese word for “Repeat” or “to do one more time” and is perfectly titled for the EP to signify its re-release of previously recorded versions that now feature new vocalist Alex Friis and bass tracks recorded by Tristan Martin plus live performance being done by Ryan Loewen along with a guest appearance by vocalist Mark Hunter of Chimaira on track ‘In Waves’.