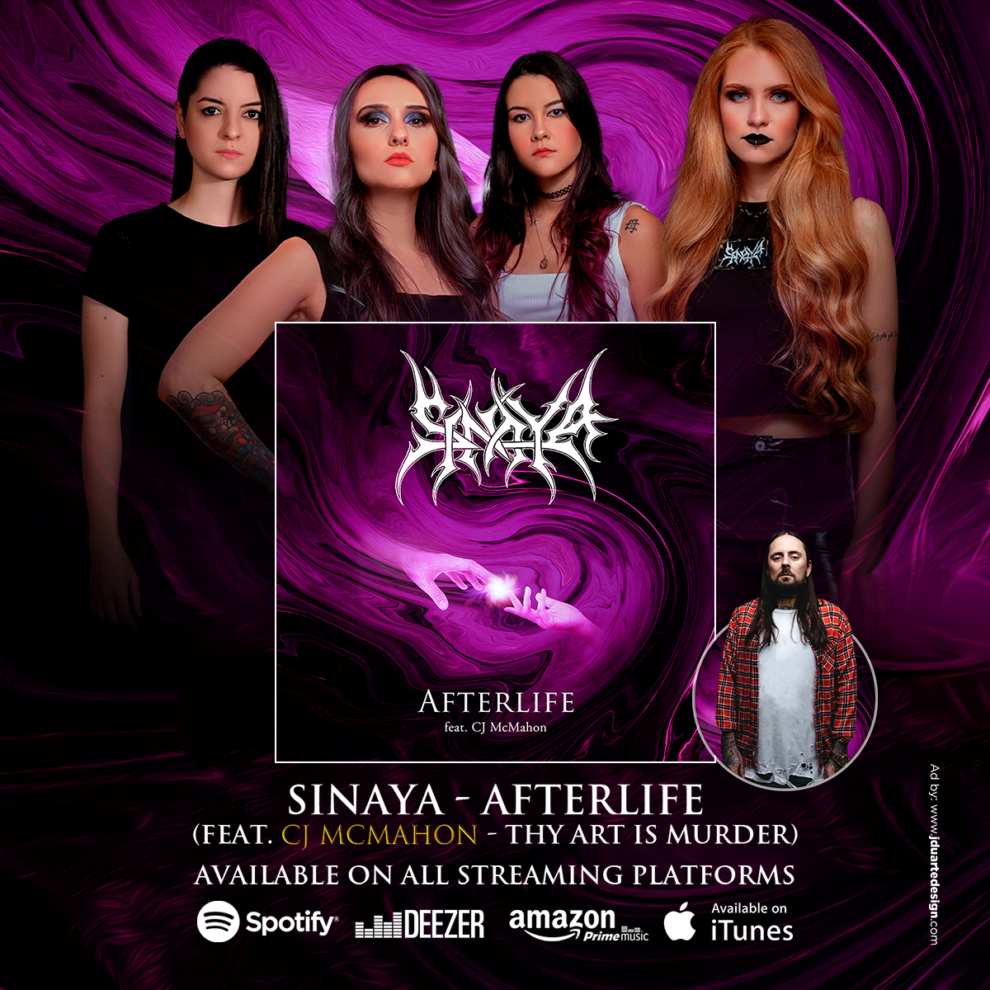 Brazilian Deathcore female masters Sinaya with the musical carrier more than a decade, became known worldwide for its sound strongly influenced by thrash and death metal. In the midst of the pandemic going on around the world, the band also found itself facing its own obstacles. The end result of this process was their complete re-design – with a great transformation and evolution in their sound.

The fusion of death metal and deathcore in their recent work – was inspired by a more modern strand of metal. And this means Sinaya became then the first Deathcore band in the world formed only by women.

”Deathcore is a style that I’ve been listening to a lot in the last few years and I’m falling in love with more and more every day. It’s a newer style, but more difficult to sing because it covers a lot of vocal techniques, and I’ve been studying a lot lately. With Helena Nagagata joining the band in 2020, migrating to this style made it even easier, as she is a very versatile guitarist who has a background in Progressive Metal and its variations. She brought to this new album songs with heavier tunings, which lined up very well with my vocal ideas in this more Deathcore style. After a lot of talking, chemistry and strategies, we have decided together to start taking the band to this new modern sound.

When we went to Fusão Studio in April 2021 to start recording the new album with the old lineup, we faced some technical unforeseen events and had to hire a sub to record the drums at the very last minute. Now migrating to this style, we needed a drummer who, technically, could live up to the new sounds. Two months later, after many auditions with drummers from all around the world, Amanda Imamura officially joined the band. She’s a drummer that I’ve been trying to bring to Sinaya for 4 years and now it finally happened. She has already played a lot of this modern style, she is very technical and precise and at the same time, she’s very strong and has a heavy hand.

Amanda Melo is a Bassist who was already a fan of Sinaya and is an extremely competent musician – in September 2021, two months after she joined the band, we went back to the studio so she could record the bass lines and she managed to play amazingly, recording the songs mostly in one take.

And with this new album, we’re here to show that the woman in extreme metal is technical, has a lot of strength (both physically and mentally), and knows how to take a high-level band seriously!
Now we’re exploring another style of Metal that we like, at a much higher level than what we used to do, and for that reason, I’ve decided to be a full-time vocalist, to be able to explore these new techniques even further. We had the support of great members of renowned deathcore bands, and one of them was CJ McMahon, lead singer of Thy Art is Murder, who you’ll be able to check out on this release. We are very happy with his featuring, as he is a huge reference for us and for the deathcore scene worldwide.

And also with our music, we still play Metal for all tastes. Some of the songs still sound mostly death Metal, others sound more Deathcore. But the next ones will be focused much more on Deathcore and its strands.

Besides CJ, who represents this new era of Sinaya in Deathcore, we have another great guest in the album: Diva Satanica, vocalist of Nervosa, who represents a celebration of women in metal.
We invited Diva, cause she’s not only an amazing singer but currently Nervosa and she is big icons in the world metal scene.’’

For the first song’s artwork, the band picked more minimalistic approach and concept, fleeing from the idea of traditional metal covers. Purple was chosen for this work, because of the symbiology of the colors, it refers to spirituality – since the song deals with the theme ‘’Afterlife’’. This color also means freedom from internal fears and other human concerns and transformation, which is what the band and the world faced after the beginning of the pandemic. The artwork was done by Artur Fontenelle from Dead Mouse Design, who has already worked with Brazilian bands such as Oitão, Torture Squad and Claustrofobia.

The full-length album is scheduled to be released in 2022 and more details will be announced shortly by the band. The complete work was produced, mixed and mastered at Fusão Studio, by Thiago Bianchi (Noturnall, ex – Shaman), who has already developed alongside relevant names in the national and international metal scene, such as Mike Portnoy, James Labrie, Aquiles Priester and Edu Falaschi.

Check out the new official music video for “Afterlife” feat. CJ McMahon (Thy Art is Murder),below: