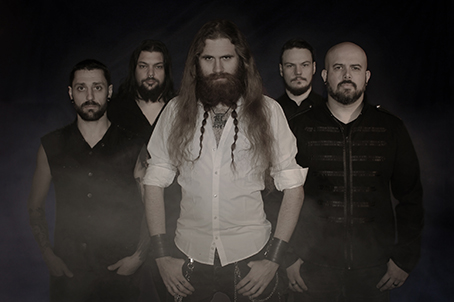 Xoan as a band has very complex music, they also proved that with their latest release “Solipsis”.With not only very good produced video, they present a truly complex song filled with some different music styles, balanced riffs, melodic parts, and of course there is energetic Rob who showed his clean vocals not only growls, and they were blended with his growl vocals in such majestic melodic way, flowing through the song, and adapted very well of course with the symphonic influences and slamming riffs, making the complexity complete, making this song a masterpiece that speaks for it self. Eros is a Greek God of Love and Sexuality, son of Aphrodite.

The band wanted with this title to show some hidden meaning, pagan meaning,  the viewers will see this secret meaning in the video, as well. Rob is quite a great actor, he did a fantastic job while acting in this video with this girl. Beautiful landscape in the video, will surely make a better experience for the viewers, with all of the melodic complexity of the song while listening to it.

In some part of the video, there was this apocalyptic symphonic music, that lift up the atmosphere of the song even more, of course in a good way, and then there is an orchestra that totally dominates in the song in the epic way, like the sounds of war, and it’s perfectly fused with the song and Rob vocals, and the end of the song there is a piano, that closes the final chapter, the song end there. It’s a almost 8 minute song so there are some story lines presented through music, great balanced riffs with melodic sounds, solos parts as well, that were so fast and great, the song has it’s own divine charm and mastery.With all of the arguments in this review, it shows that this is a bad-ass song with great story-line and everything else, and the listeners and viewers will enjoy it, without blink of an eye. Melodic destruction with the power of Eros, will make the apocalypse that will bring death to all.

An elusive name born amidst Switzerland’s highest mountains. Never quite fitting in any of the numerous galleries metal has to offer, drifting through the extremes whilst  juxtaposing finesse and vehemence from an unworldly orchestra, endlessly exploring  the vast echoic gloominess of the human mind.

In only a few short years, the combo led by Vincent Zermatten (guitars) and Rob Carson (vocals/orchestrations) has managed to tour the world through the release of their critically acclaimed debut album “The Drift”, notably across Europe with gothic metal monsters Sirenia and folk metal legends TYR, in Japan with Obscura and Archspire, in the US with The Veer Union, and sharing the stage in festivals across Europe with bands such as Megadeath, Testament, Exodus, Gojira, Paradise Lost, Eluveitie and many more.

In 2019, Xaon is back with their 2nd album somberly entitled “Solipsis” available through Mighty Music, bringing the band’s grandiose aggressiveness to a whole new level, pummeling their way through a cataclysmic atmosphere while reaching a new majestic apotheosis. This album is set to debut in the spring, which will see the band  performing across Europe with Septicflesh and Krisiun while continuing to prove themselves as an upcoming force around the Metal world.

Check out the premiere for the “Eros”, here: