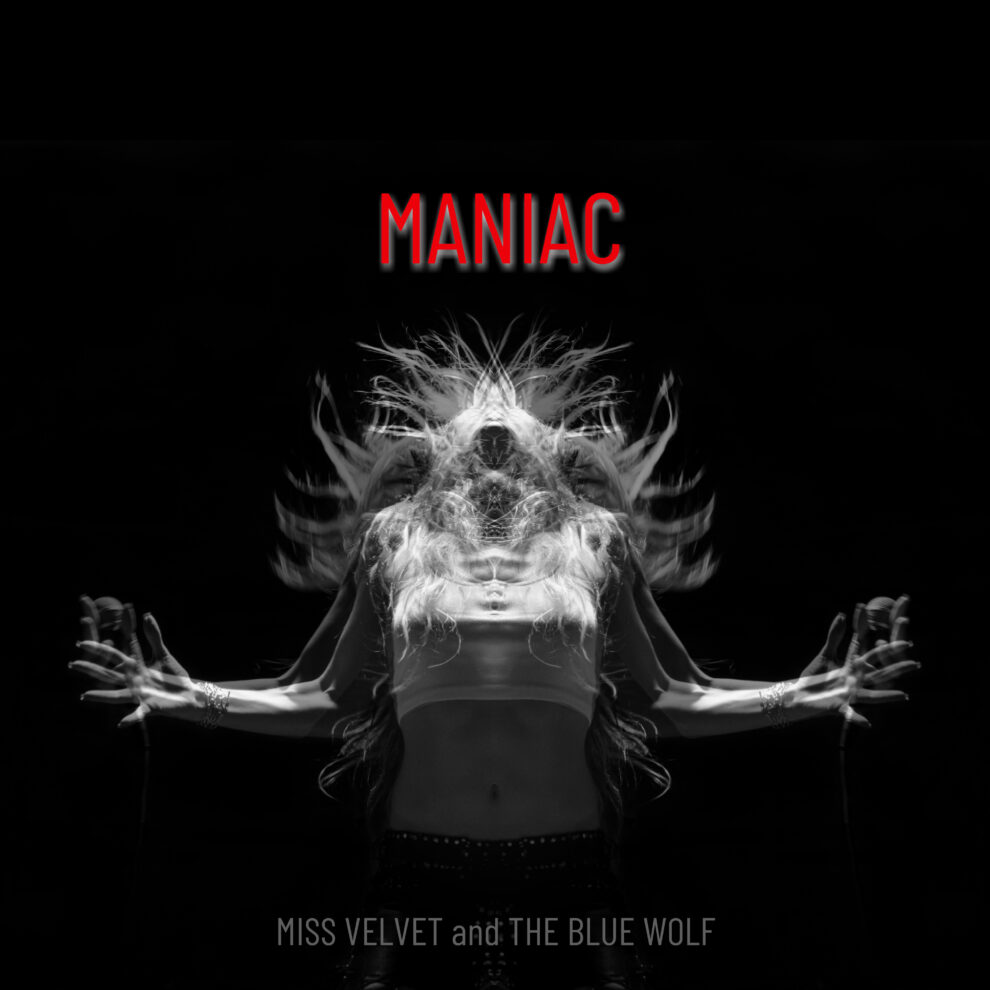 Funk/ hard rock New Yorkers Miss Velvet and the Blue Wolf will premiere this brand new song “Maniac” this Friday on November 6th. Until then here is the review of it by Vladimir Cincovic and how the single sounds to him in his own words.

Are you a maniac, are you ready to become one? Personally, when I heard the first tones of the song, it was mind-blowing – it has so much energy and passion driven by this band – that I become maniac in a good way, pumped with the energy myself – while experiencing it.

This is a band that has true originality to it, they experiment with the sounds and those 70’s psychedelic and funky sounds, hard rock and heavy metal sounds like a true professional musicians as they are – filed with the creativity and dominating strong voice of the Miss Velvet, that is not exception in this song as well, but also it the rest ones that they released. And this shows this one is the success like a previous ones  ”Launch” and ”Psycho Interferous”.

Yet again, this song to me personally I must say subjectively – that this is the best song of the band, it presents the true spirit of the band – what they present, who they are, the whole concept of this band and their glorious technical performance, but mostly it points out the best of Miss Velvet and her contagious charisma – that is the most present in this song – which makes this song such a striking crusher as it is – the fans of the band will not know what hit them, but they will love it from the beginning till the end.

Objectively I can say that the fans will embrace the whole song in the best way, since they know this band as the band that stays true to themselves and their style.  They will like the whole atmosphere and enjoy the sounds that are coordinated in that smooth way with the vocals of Miss Velvet – which of course are strong, powerful with the high range of vocals to it and at the same time harsh, that also add the special effect to all of their songs and that is the magic of this band, their balanced and coordinated music and the outstanding power vocals of the Miss Velvet and her charism that dominates over everyone’s mind,  of course the new audience will love that too about them and their creative, but also very special music.

I like how the song starts with this tension to it, as it is suppose to be, the intro part of it. The song then continues with this heavy metal riffs added to the song, which is the interesting part of the song mostly, also it is refreshing adding the true harsh ans wicked vibe of the song to it. This heavy metal riffs are so cleverly combined with the Miss Velvet’s vocals and her charismatic voice and performance – presenting the parts of the song as the highlight of the whole song in such catchy and powerful way, one more reason that shows why this song has it’s own greatness and creativity – that is sharp and divine.

The whole song has it’s parts, every second of it is the new experience – in which the song has it’s chapter presented by sound and vocals, pumping the adrenaline through out the whole song, I must say I like how they put the whole tension vibe to it, from the beginning till the end, as the time passes by in the song, the tension is bigger and bigger and there are more surprises to it – which are in the technical terms just vicious as well the pshocyhodelic sounds and crazier in every second of the song and the band just completely dominated and nailed it with the psychedelic atmosphere and the fusion of the other influences like funk, hard rock and even heavy metal in it.

Sounds, melodies and production are just arranged in this balanced, but excellent way, every tone is precisely produce in the song, melodies mixed with the whole structure of the song, riffs and drum set – creating this catchy, but unusual vortex of great balanced music, especially the mix for the Miss Velvet vocals , mostly the chorus, this band arranged the vocals in such perfect way, combining her voice with the whole structure of the song and solo guitar parts, that added this catchy and outstanding vibe and sounds to it, that made Miss Velvet’s presence and charismatic approach even more not so ordinary – than it already is, but something powerful presenting her unique , special and charismatic voice in such not of this world way, like it’s one of a kind thing – like it is apparently.

Lyrics are about being a maniac, that nothing is wrong about having a wicked side , also that no one has the right to call you a maniac, since they also have a wicked side, we all do. The band presented this unusual song and it’s vibe, the whole story in such a honest, fierce, vicious and amazing way – also without Miss Velvet’s vocals this song won’t be so unusually good, catchy and just contagious in every way, that will be repeated in listeners’ mind all over again.

High octane rock n’ roll fused with the influence of the 70’s, presented in the modern production has it all, the energy, the vibe and also fierceness of the modern day hard rock. Highly recommended for the Janis Joplin and Pearl Jam fans. Enjoy being your own personal maniac with the glorious sounds of rock n’ roll.