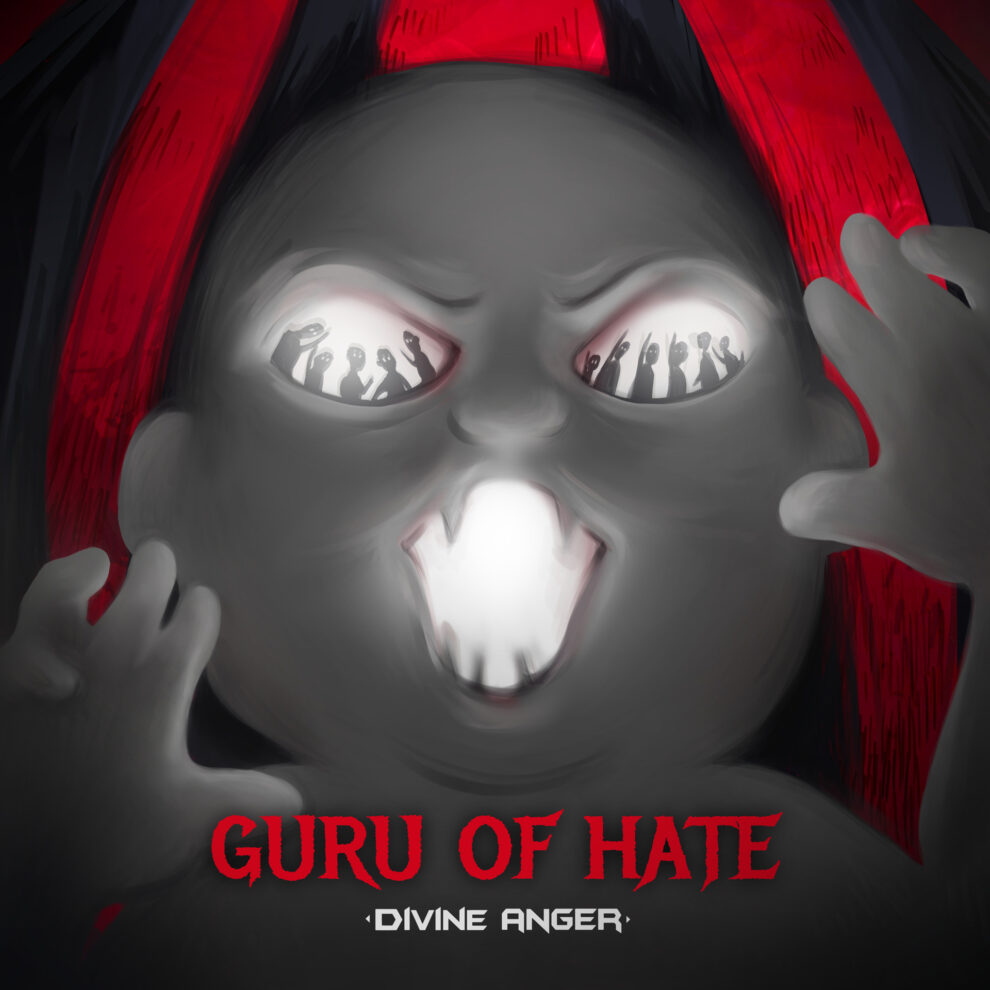 Here it is, the first debut EP “Guru Of Hate” from the Expressive power metal lords Divine Anger. Mind-blowing, vicious, truthful and creative EP that has a variety of  perfectly arranged sounds, vocals and coordinated/balanced music – with the amazing story lines in each story of the song. The whole EP portraits this aural art – that has that ultimate metal touch to it, creating the uncompromising metal crusher, as it is.

From the personal perspective, I have so many things to point out here – but the most best thing about this EP is how this crushing riffs, changing  of the atmosphere in the songs, from explosive ones to slower atmospheric ones – gave this stories in the songs it’s soul and essence – basically it can be heard from crushing riffs, skillful and great vocals, outstanding drum set – the very essence of the stories. Presented in such smooth and clever way – for the songs to not be the songs – with the excellent technical part to it, as they are – but also to have a story, to tell a story. That portraits the very essence of the story to its core. Subjectively, that was the most amusing and fun thing that I like about this EP. The fusion of lyrics and sounds – like a perfect symphony of destruction and a roller-coaster of truth.

The record begins with the symbolic song “Guru Of Hate” – that has the same title as the EP. This song is a 2 minute song – that has the best story on the record, it is about the real treat and enemy. About the ones who made a matrix of this world – that keeps as all in constant hate and ignorance – the opposite of Guru’s true form and that is the Guru of Hate. The song is full of crushing riffs, groove elements, catchy sounds and rhythmical section that are totally combined in awesome way with each other, creating a strong foundation both lyrically and technically. This song got me hooked from the beginning till the end and the other metal fans will like this one to, since it is rebellious and fierce, presenting the true form of metal.

Second one – with the second best story is “Behind The Wall”. The most catchiest song on the EP – followed by some great chorus – that is the most catchiest thing in the song. And there is amazing story about the Anne Frank. Who died in WWII, also killed by Nazi soldiers – with her family. The guys from the band payed the special tribute to this story. I think it is the most authentic song, as well on the EP, it has that specific vibe – that completely present’s the power and the strength in riffs, vocals, melodies and all of the technical part that contributed so much in portaging the essence of the story and the song. Vocal arrangements – with growls and clean vocals are fused perfectly with each other and the whole structure of the song and melodies. The song is also a reminder that this things must never happen and that war is not the answer, since the innocents dies. Powerful rhythmical section, strong and prefect vocals, coordinated drum set – all of this fused with some groove moment’s created this smooth atmosphere, a true powerful and rebellious tribute to a brave girl. Overall this song is the most authentic, coordinated and just catchiest , powerful one on the EP – followed by inspiring story of Anne. And the listeners will most like it’s historical spirit of it, as well as the ultimate high class riffing and arrangements of sounds/melodies fused together.

Third one is “Always Now”, it has a slower tempo than the two previous ones, but with a great combination of sounds, riff patterns and vocals – gave this song it’s smooth groove sounds. That lifts up the atmosphere to the maximum in the song. Creating an unique melody, that is very well adapted to the vocal arrangements in the song.  ”Always Now” has this heavy metal moment’s that are very similar to the 80’s sound, produced very well – better production than in the 80’s,  this is done so that this heavy metal sound could be pointed out even more – with the elements of power metal. It’s an interesting fusion, since both sound great in this combination of this song – with very own personal touch from the band, original approach without any influences.

Fourth one is “D-Day”. This is the most complex and intense song on the EP. It’s is very well arranged and produced as the rest of the previous songs. It has this prefect doomsday intro, war rhythm section with some catchy balanced riffs and drum set, that continues with some fast riff slamming that resembles like it is speed thrash metal. Very well coordinated of course, adapted to the whole story of notorious D-day.  Then it gets to this melancholic apocalyptical/melodic sounds and music, like it is the end of the song – very symbolically presenting aural form of destruction and chaos. And of course, the song continued once again in the fierce way – with a little bit a melodic touch – getting most tension to it. That end of the song is just an epic one – showing the true mastery of this band and their unique skill to balance and fuse fast rhythm and slow rhythm sections. And the other technical parts that they do flawlessly. The song is about survival, through the eyes of the one individual, saving her’s/his life – her/his need for life , even if everything is gone. That is why this is another reason that this song is doomsday anthem of destruction.

The final fifth song is “When Angels Sleep”. I thought first is this a ballad as the last song? Did the band tried to leave an opposite message of hope or something? Apparently it is not. It starts with this angelic lullaby, continuing in a ballad manner. Then it’s starts with the furious riffing and the speed metal moment once again, since the guys like to implement this genre in their songs. It is for sure  the most melodic song of the record – filled with rich and divine melodic sounds – that present this song in the best way. And they are coordinated so perfectly with the riffs, that fast/vicious drum set and amazing unique vocals, it’s just a excellent melodic metal sound – very well adapted to the whole record and the other songs, before. The rest of the songs are as well adapted and synchronized in a smart and clever manner. This is a divine melodic metal song – that closes this record and the chapter of all stories in a glories way.

This record is in full, the complex masterpiece of metal. Every detail is planned, arranged, produced – with the sounds, riffs, drums, vocals so perfectly – that it shows how this record is just flawless metal crusher in every way.

The guys really put the effort into this EP, it must have been hard recording it so precisely and coordinated on all of the aspects of the EP. Creating this special experience where lyrics and sounds are the same, where you can hear that the melodies and sounds are presenting with-out a word the story in the song. Followed by the vocals in it, that contributed even more to the full presentation of this metal mastery.

Every song is different, but in it’s structure each song is similar in that technical part of it. It is very hard to combine variety of sounds, melodies to be different – but at the same time very close and almost the same and to follow the stories perfectly- so that the record has a full story to present, that is followed by divine sounds and ultimate metal sounds. I like how this band gave each song it’s authenticity and not changing in each song  sound completely , so that it doesn’t sound like it is from another record – it really shows that they are creative masters,  that they know what they want and how to present it. Stories added their special touch to the songs and this creative masterpiece – that has something to bring to the world.

Divine Anger shows divine metal like never before. It is metal divinity that objectively all of the fans of metal will like. Insanely great record, that is worthy of listening followed by it’s  uncompromising stories and the power metal sound of divine anger.

Check out the visualizer announcement for the upcoming EP, below: